While a final decision has not been made about what the Fallen Leaf Lake-Camp Richardson area trail system will look like, the U.S. Forest Service has incorporated the public’s views into the alternatives that are now under consideration.

Two trails on the far end of Fallen Leaf Lake that end on private property were going to be decommissioned as was a trail on the west side of Taylor Creek. 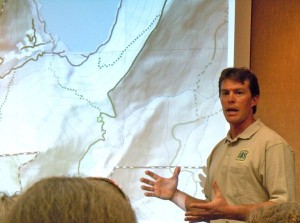 Jacob Quinn with the U.S. Forest Service on May 16 talks about plans to change trails in the Fallen Leaf Lake-Camp Richardson area. Photo/Kathryn Reed

Public outcry has the Forest Service rethinking its original plans. Those three trails are in Alternative 4 – the preferred alternative of the six that will be included in the environmental analysis when it is released in mid-July.

“We would devote significant energy to keep those trails and get the easements,” Jacob Quinn said of the trails on the west end of Fallen Leaf.

Quinn, who is leading the charge on this project for the Lake Tahoe Basin Management Unit, gave a presentation Wednesday at the South Lake Tahoe branch of the county library.

By some accounts, those trails have been used for close to 100 years.

The trail next to Taylor Creek has a steep bank that is eroding that could mean relocating that section back about 35 feet. Otherwise, that trail is not likely to see much upgrading.

“There may be be stone steps or native material to get to the creek,” Quinn said.

Quinn explained the five ratings for trails go from being accessible for practically everyone to rugged where being hit by a branch while mountain biking would be expected.

All Forest Service trails in the basin are open for multiple uses – hiking, biking, equestrian – but trail builders create routes that are more desirable for certain users to naturally keep them separate.

“It’s not just recreation we look at,” Quinn told the group.

This is why the trail to Mount Tallac via Spring Creek will be decommissioned. This is a breeding area for northern goshawk.

This summer the agency will also try to determine if Lahontan cutthroat trout are in Taylor Creek.

Yellow cress is one of the plant species the Forest Service will be paying attention to.

While more than 13,000 acres are included in the plan area of this heavily used system on the South Shore, a much smaller area will be touched.

The point of the Fallen Leaf Lake Trail Access and Travel Management Proposal is to create a user-friendly trail system with routes that are all designated and then maintained by the Forest Service. Gone will be the user-created trails.

The problem is trampling on so much land compromises vegetation and habitat. It’s also a safety concern because land managers may not travel those routes and therefore not find someone who is injured.

In showing maps of what is in the area now compared to what could be there in several years when the work is completed, more loops and fewer offshoots are visible.

But new routes are also slated to be built – like one between Tahoe Mountain and Fallen Leaf Lake. More parking is expected to be put in at Tahoe Mountain, too.

Gone completely, at least as proposed now, will be all the routes from West Way through the meadow to the dirt trails to the east of the paved Camp Rich trail. People in the Tahoe Keys-Tahoe Island areas use this to avoid the masses on the paved trail. A private property owner who lives part time on that street in fall 2009 cut off access to mountain bike riders who would use the edge of his property to get to or from the meadow. According to Quinn, even the California Tahoe Conservancy parcel farther up the street will no longer be an access point for the meadow.

Unrelated to this massive project is the repair work to the Pope-Baldwin Bike Path (aka Camp Rich paved trail) that started Tuesday. This is a stopgap measure to fill in the holes on the heavily used route.

Note: More information about the project is online. The draft EA when it is released this summer will be out for public comment for 30 days. The final EA is expected to be done in mid-October.