Basecamp Hotel wants to be just what its name says – a base camp. Only instead of tents to sleep in, completely refurbished rooms are provided. Instead of scaling massive peaks, it will be a day or week of playing outside at Lake Tahoe.

“We are trying to create a communal type of atmosphere like a ski house, but with the amenities of a hotel,” explained Robbie Graves, who will manage the hotel.

Basecamp replaces the old Block hotel on Cedar Avenue in South Lake Tahoe behind the would-be convention center. If all the permitting issues can be cleared up, the hotel expects to open to the public June 20. 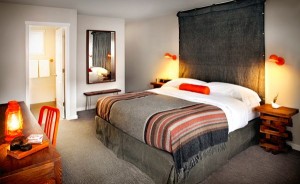 It took more than $1.5 million to gut the place. The foundation and framing are about all that are left from the original building.

“Every door had been kicked in, every toilet had been used without water, gangs were living here, graffiti was everywhere,” owner Christian Strobel told Lake Tahoe News. “We had to physically evict people who were smoking some sort of drugs.”

Recycled wood has been installed as well as environmentally friendly fixtures.

In addition to a continental breakfast that will be served to overnight guests, a communal dinner will be offered three nights a week.

Deals are being worked out with tour operators in the area. Discounted lift tickets, bike rentals and snowboard rentals are likely to be part of lodging packages.

One room is called the Explorer Room. While it has a hostel-like quality in that it has a series of bunk beds to be shared by people who probably don’t know each other, single room nights won’t be available. It will have more of a shared ski house feel in that people must pay for 10 room nights up front. Various payment plans are still being developed. The philosophy is along the lines of season passes at a ski resort with possible discounts during midweek and blackout periods. It’s a co-ed room.

People will be able to use Instagram technology in the lobby area to print photos taken that day. A large TV will allow a GoPro video shot earlier in the day to be shared with other guests.

“We want to build a strong community,” Graves said.

A small bar for hotel guests and locals is being worked on. Strobel spent Thursday in Sacramento talking to Alcohol and Beverage Control officials about permits.

Strobel has a background in the hospitality industry, having worked for the Joie de Vivre hotel chain. Basecamp, though, is the first hotel he has owned.

“What we want to do is have a hotel for people who love the outdoors; for people who don’t want to stay in the casinos and inhale secondhand smoke,” Strobel said.

Fire pits in the patio area and hot tubs on the roof are designed to keep the outdoor fun going on the property long after guests are done exerting themselves playing at Lake Tahoe.