Snowboarding over a car may not be an original trick, but how many 5-year-olds can say they’ve done it?

Bailey Duran for one.

First Tracks Productions in South Lake Tahoe immortalized the event on film. This video and two others by the local company caught the attention of Ski Channel. The three are part of a top 10 list of best mini shredder (aka kid) videos of the year. The one of Bailey jumping the car is No. 1. 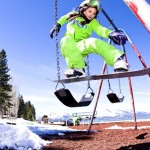 “The folks at Ski Channel came across them organically. We didn’t send them to them,” said Anthony Cupaiuolo, who with his wife, Karen Johnson, started the ski film company in fall 2001.

Bailey is from Connecticut and mostly skis Vermont. Dylan Heinstein is from the Bay Area and is part of the Burton program at Northstar. His whole video was shot at Northstar. Lexi Roland is from Minnesota, though a significant amount of the winning video was shot in Lake Tahoe.

It’s not that First Tracks doesn’t work with Tahoe area youth; it’s all about parents finding them. And with the Internet making the world smaller, people have more choices readily available for whatever they want.

While there are “Little League parents” in the ski world, Cupaiuolo says most of the parents he runs into are easy to work with. Parents aren’t likely to ask someone to shoot their kid knowing a tantrum might be thrown. The kids Cupaiuolo has worked with all want to be on the slopes.

“It’s easy because all the kids I work with are doing this because they love it,” Cupaiuolo told Lake Tahoe News.

When he started in the ski film industry it was all about the backcountry and making a DVD to sell each year. But with everyone thinking they can shoot quality video, YouTube’s popularity and the public’s desire for immediacy, the last DVD First Tracks Productions put out was in 2009.

That’s not to say the company is only shooting kids. They like to mix it up. Cupaiuolo likes being in the backcountry on a splitboard.

“Working with adults you can talk about what it is we are looking for,” Cupaiuolo said. “Kids want to play and have fun.”

But at the same time those youngsters have seen plenty of film to know what tricks are hot, who’s doing what and that camera angles, sunlight and shadows all play a part in how a video of them will ultimately look.

And these aren’t your average youngsters.

“The kids we have been filming are already on a level where they are doing stuff I don’t do. You have to check your ego aside,” Cupaiuolo said.

His footage of Lexi was part of the Warren Miller movie two years ago. The legendary film company has been talking to Cupaiuolo about the talent he will be shooting this winter in case there is an opportunity to incorporate it into the 2012 Warren Miller film.

With a bit more time on their hands now that First Tracks isn’t doing an annual video, the company is expanding a bit.

This summer they were at Northstar to shoot the All Women Sports Camp.

Mountain biking and BMX were sports shot this past year by First Tracks. Next summer kayaking and surfing are on the list of things to film.

They regularly shoot promotional footage for Prior Splitboards in British Columbia, as well as work for other companies. With video being a growing segment for how companies promote themselves, short travel vignettes are becoming popular.

What Cupaiuolo is working on is securing a six-episode television project featuring young athletes. He wouldn’t give more away about it at this point.

While Cupaiuolo and Johnson have a 9-month-old daughter, she isn’t on YouTube yet. Cupaiuolo said family and friends don’t understand why only four videos of the little one exist. He says that may change when Olivia starts riding. Then he’ll definitely have a Tahoe kid in his stable.