Taking a look at the South Shore it doesn’t take a rocket scientist to figure out things must change or the area will be irrelevant to tourists.

Various stakeholders who want to revamp the area from Ski Run Boulevard on the California side to Kahle Drive on the Nevada side have put out a call to action. The state line is not an impediment, but instead viewed as nothing more than a traffic light along Highway 50.

“It benefits us if we work regionally,” Lisa Granahan, economic vitality manager, in Douglas County said. A collaborative approach with more partners is also beneficial when it comes time to look for funding for specific plans. 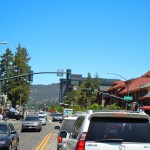 Driving down Highway 50 it's hard to know the recreation opportunities that abound on the South Shore. Photo/Kathryn Reed

As South Lake Tahoe City Manager Tony O’Rourke put it, “We are one market … one destination. Tourists could care less about the state line.”

Redevelopment attorney Lew Feldman is impressed so far with how things have evolved since last fall.

“The level of participation is extraordinary. It is a new day in terms of trying to achieve environmental and economic excellence,” Feldman said.

Design Workshop’s Aspen and Lake Tahoe offices have been massaging the vision that is starting to evolve. This week more clarity to the direction players want to go will come to light.

A two-day charette is scheduled for Tuesday and Thursday, with Wednesday being a working day. It is not open to the public.

Richard Shaw of Design Workshop says what will make this plan different than all the others sitting on shelves collecting dust is that it will have a vision for the South Shore out 25 to 30 years, with some ideas that can be implemented immediately. A working document should be completed this fall.

All of this talk of turning the economic and environmental tide around began in Douglas County. Knowing government cannot cure all that ails society, a partnership has been formed with private entities to help various regions in the county – with one person designated as the “champion” of a particular project.

Tahoe is one of 12 projects in the county.

Granahan said government can’t do it alone. She said bringing the private sector on board makes sense because businesses have a lot to lose by not helping to improve the economy.

In the county’s strategic plan it’s about concepts more than it is specifics to provide more latitude and creativity.

Bradford said, “The refrain coming back was the problem is we don’t have a plan.”

Gaming is no longer king and everyone wants recreation to be the leading tourism draw to the area. It’s also one of the three components to the Lake Tahoe Prosperity Plan. (B Gorman with Lake Tahoe South Shore Chamber of Commerce did not return multiple calls.)

South Tahoe Alliance of Resorts (the former Gaming Alliance) is paying Design Workshop $50,000 to come up with a plan.

“This town is dying. Someone needs to resuscitate it,” Bradford said. “We need a discovery a day for tourists.”

“I’m not disagreeing the initial reason people travel to Tahoe is the lake,” Shaw told Lake Tahoe News. “But the reality is when you are there, particularly on the South Shore, it’s a struggle to find recreation opportunities. Short of high rises, there is almost no view opportunity.”

He pointed out while locals and repeat visitors know where the public beaches are, it is near impossible for a first-time visitor to find them. The same goes with mountain bike trails and other outdoor activities that the marketing gurus are telling them exist here.

Bradford simplified the goal of all of this  – “To draw a picture of what Tahoe should be.”

While sitting in his casino’s restaurant Bradford readily admits the gaming model is no longer relevant.

“We never created a connectivity,” he says. “That is what we are focused on now. How we connect the product.”

The product is no longer what’s inside, but everything that is outside.

“This will help TRPA understand what the local jurisdictions and property owners in the Compact area believe is necessary and desirable to achieve environmental and economic excellence,” Feldman said.

What those involved in this process want is to show the bi-state regulatory agency there are other ways to accomplish environmental goals, which in turn will stimulate the economy. But change must come from the Tahoe Regional Planning Agency to make all of this a reality. Stakeholders are hoping to be influential as the Regional Plan update is being worked on and should be released late 2012.

So many people today speak to the built environment being horrible for the natural environment. This is because what was erected in the 1960s had little or no thought about sediment, what pollutes the lake and how runoff without treatment is not a good thing if Lake Tahoe is not to turn into a brown body of water.

“It’s a very risky and costly process to gain approval for a project (in the Lake Tahoe Basin),” Shaw said. “There is a conflict between the business model that can succeed and what development parameters are.”