A letter expressing South Lake Tahoe’s displeasure with fixating on how far a scientific white plate can be seen in the middle of Lake Tahoe instead of dealing with the muck growing near the shore is being finalized today.

City Councilwomen Claire Fortier and Angela Swanson were tasked with working with staff to formulate the words for the letter to be sent to the state Water Board by the March 18 comment deadline. The letter will be on the council’s March 15 agenda for approval.

The state board plans to conduct a public hearing April 18 in Sacramento regarding the total maximum daily load allocations approved by Lahontan Regional Water Quality Control Board in November. Officials from the regional office have been briefing state board members this week about TMDL in Lake Tahoe. 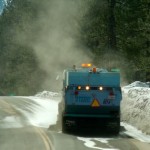 A street sweeper in South Lake Tahoe on March 9 is designed to reduce sediment. Photo/Kathryn Reed

“We need to wave the flag that says before you pass this more consideration needs to be focused on the costs and science,” Fortier told Lake Tahoe News. “I personally feel as if we are being railroaded with a standard that is impossible to meet.”

At a September meeting about TMDLs Bob Larsen, environmental scientist with Lahontan, estimated it will cost $100 million a year for 15 years to accomplish his agency’s clarity goal. He also said that estimate is “very rough.”

Today the Secchi disc can be seen to a depth of 70 feet. The goal is add seven to 10 feet to that number.

To reach that goal the city, five counties and two state transportation departments in the Lake Tahoe Basin have mandates put on them by Lahontan to reduce the fine sediment from their jurisdictions that reach Lake Tahoe.

At the council meeting last week, Swanson called it an unfunded mandate.

Lauri Kemper, assistant executive officer with Lahontan, told Lake Tahoe News the municipal stormwater permits the agency is working on that should be before her board in October will focus on maintenance of what is in place – which in turn will allow the local governments to meet the state’s initial goals.

“We think with the first five-year targets some will have met them. We are comparing it to the 2004 baseline year,” Kemper explained. “They will get credit for anything they have done in that time.”

Fortier at the meeting and afterward questioned why the near shore – the depth people wade into – isn’t being addressed.

“Milfoil is a problem, but it’s more of a habitat problem than water quality,” Doug Smith with Lahontan told the council.

He admitted there are a lot of unknowns regarding the near shore.

Kemper said Lahontan is working with other entities that are addressing invasive species issues. Another thing her agency is looking at is allowing aquatic pesticides to be used for the first time in Lake Tahoe. A hearing on the subject will be conducted this spring, with possible adoption in the fall.

“The good news is everything we are doing is for lake clarity,” Kemper said.

She also pointed out how the city has a number of drainages that contribute to the near shore being less than pristine. Some of those will be cleaned up as Lakeview Commons comes on board and Caltrans does its Highway 50 projects starting this year.

In regards to the TMDL time line, after the state board has its hearing next month, which could be pushed back to one of its May meetings depending on the number of comments received, the Office of Administrative Law has 60 days to make a decision. Then it goes to the Environmental Protection Agency for approval. The Nevada Division of Environment Protection also has to approve the plan.

If all the agencies approve the TMDL for Lake Tahoe, it would become the law of the land once the EPA signs off on it.