“I don’t know what to say. It just really, really, really hurt a lot,” Holly Eimer, owner of Holly’s Place, said of her experience with former financial planner Lori Zoval.

Zoval is the South Lake Tahoe resident indicted last July on charges of wire fraud. The charges stem from an investment fraud scheme allegedly enacted by Zoval while working as an investment banker in Folsom. However, Eimer said she was also swindled out of hundreds of thousands of dollars by Zoval.

Sitting in the common area known as the Rainbow Room at Holly’s Place, Eimer describes how Zoval became a trusted friend and colleague who nearly cost her this business. Holly’s Place is a dog-friendly vacation retreat in South Lake Tahoe. The pet-friendly sanctuary sits on more than an acre in the center of town and consists of four studio units, one cabin and the Rainbow Room which was formerly a barn. The community kitchen, flickering wood stove, casual sofas and ping pong table within make the Rainbow Room a cozy place for guests to hang out, and, of course, dogs are always welcome. 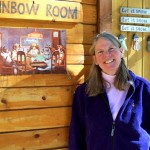 Holly Eimer of South Tahoe is trying to be recover after being swindeled out of hundreds of thousands of dollars. Photo/Jessie Marchesseau

“I don’t care about making money,” Eimer said. “I just want people to love this place as much as I do.”

This sunny outlook may be what has kept Eimer and Holly’s Place going after losing three cabins to foreclosure, dealing with a tax nightmare and watching her nonprofit, Tahoe Helping Hands, go belly-up. She estimates that hiring Zoval cost her nearly half a million dollars.

Eimer met Zoval through the South Tahoe Chamber of Commerce in 2006. She says she was impressed right from the start and soon hired Zoval as her financial planner. By the end of the year, Eimer had hired Zoval on fulltime to run Tahoe Helping Hands, an organization she set up to make the retreat wheelchair accessible.

Eimer was diagnosed with multiple sclerosis in 1989, and though she is not in a wheelchair now, she knows she might be someday. For Eimer, the disease has affected her cognitive abilities more so than her physical abilities, something she suspects may have made her an easy target.

Eimer said Zoval convinced her to refinance three of her properties and opened numerous credit card accounts under the name Tahoe Helping Hands. She said Zoval then used the credit cards extensively on trips, hotels and a lavish lifestyle, leaving Eimer with thousands of dollars in unpaid credit card bills.

Zoval was in charge of the overall financials of Tahoe Helping Hands for nearly two years. Then in October 2008, Zoval went on a business trip to San Diego and never returned.

Eimer said she considered Zoval a friend, and had even allowed Zoval to live on the property with her son and boyfriend while she was employed there. However, after Zoval left, Eimer discovered bills, loans, mortgages and taxes had not been paid, and she was facing foreclosure.

Having founded Holly’s Place more than 20 years ago, tears well in Eimer’s eyes as she talks about losing three of her cabins. Her dream of a retreat for people with disabilities is all but gone now. And after what has happened, at 61, Eimer is ready to start slowing down.

“It’s time to downsize and time to rest,” she said, “and I just hope I can financially make it.”

Eimer was more than willing to provide financial documents to the FBI last summer for use in the case against Zoval. Eimer said she does not want Zoval to do this to anyone else.

Zoval pleaded not guilty at the initial hearing six months ago, but the case is still in the pre-trial stage. She is out on bond, and her lawyer, Mark Reichel, said she is “working hard to support her family through a tough time.”

If Zoval pleads not guilty at the April 8 hearing, the case will be set for trial at that time. Reichel said he does not know how Zoval will plead.