STATELINE — The giant boulder that serves as a welcome sign where Montreal Avenue and Heavenly Village Way meet signals a solid decade of vision and work. But the word that may keep the nation’s first bi-state park from opening is money.

The park on the California-Nevada state line is feeling the constraints of budget issues from both states. 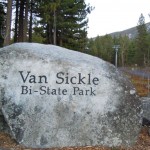 Van Sickle Bi-state Park will open in 2011 if funding comes through. Photos/Kathryn Reed

Lead agency Nevada State Parks just underwent a final inspection of Burdick Construction’s work on the first of four phases of the Van Sickle Bi-state Park behind Heavenly Village and the Stateline casinos.

It was the long dream of rancher Jack Van Sickle, who donated more than two-thirds of the land for the 725-acre park to the state. Nonetheless, more work is slated to be done by the California Tahoe Conservancy and Tahoe Rim Trail Association. The former agency has placed a bond allocation item on its January board meeting agenda for trailhead interpretative facilities at the park’s gateway. The latter organization has pledged to pick up utility costs and other maintenance expenses as well as continued connector trail work next spring.

Then there’s the question of when the park will open. The answer teeters on money.

If all goes as optimistically planned, the urban trailhead may open next summer. Lake Tahoe’s Environmental Summit, which will be hosted in August by Sen. Dianne Feinstein, D-Calif., is usually set against a beautiful backdrop. National Trails Day scheduled in June could be another option.

Either way, Nevada Parks Deputy Administrator Steve Weaver has some doubts about the future of the park. He estimates it will cost up to $20,000 a year to operate – beyond the $2.8 million-plus spent on construction of the first phase. The fire hydrants alone – three in California and four in Nevada – will consume $157 a month.

“There’s nothing in this budget to operate this park, and I don’t see anything in the foreseeable future,” Weaver warned while on an exclusive tour with Lake Tahoe News this month. “I think it’s very challenging. I don’t think anything (more) will be developed in this park in the next decade.”

Despite the dire forecast, Weaver is pleased with how the three-season park is shaping up. A half-mile road with a storm drainage system leads up to a 2½-acre day-use area with four picnic tables, a vaulted restroom scaled down from the flush variety, the start of the irrigation system, fencing, landscaping and a parking lot with 29 spaces. Six are designed for horse trailers. Portions of trails for equestrians, hikers and mountain bikers lead up to a ridge known for its Heavenly-style views along the gondola tower line.

Now, bears and other wildlife mix with the homeless on the park’s ridge, which is susceptible to wildland fires. A small blaze started by a homeless encampment sent fire crews out last summer. In 2002, a 673-acre fire was ignited by a cigarette along the California side of the scenic ridge.

With no development money from California, the Nevada park service fronted the costs. But the park system has lost 46 percent of its funding since 2007 and resources are tapped. With Nevada Gov.-elect Brian Sandoval’s pledge of no new taxes and fees, the donation box may be out – literally.

Nevada Parks needs help from the patrons and its state neighbors next door even though California’s budget is in far worse shape. The Legislative Analyst’s Office just announced a shortfall climbing to $25 billion. Voters also failed to pass a measure that would have funded the Golden State’s park system through vehicle license fees.

Bruce Eisner of the CTC figures his agency would cough up about $150,000 next year at its Jan. 11 meeting to help fund gravel roadwork at the gateway to the park where the old Van Sickle barn and cabins sit.

“The money is slowly being freed up. We’re now in a state of catch-up (with Nevada),” Eisner said.

There are also plans for a restroom at the lower level of the park and an interpretative kiosk for visitors, who will probably wander up from the heart of the South Shore’s bed base on both sides of the state line.

The park, which will be open for spring, summer and fall visitation, is expected to bring out a host of outdoor enthusiasts – including those who have ventured into it from the famed Tahoe Rim Trail which circles the lake.

“This park and trailhead will provide an easily accessible trailhead for the residents and visitors to the South Lake Tahoe-Stateline area and may become one of our busiest trailheads,” Tahoe Rim Trail Association Executive Director Mary Bennington told Lake Tahoe News.

This is one reason why the association has promised its operational support to keep the park going year after year.

“We see this as a win-win, even though it is a bit outside our normal mission,” she said.

Bennington added that 100 association volunteers spent National Trails Day last summer building a half-mile of trail. To date, they have completed at least 8 miles of the work called the Daggett project, which links the park trail to the Rim Trail at Kingsbury Grade in two places. The goal is to finish the Daggett connection by the next Trails Day celebration.