INCLINE VILLAGE – The wind in my hair, a tight grip on the steering wheel and the cozy comfort of being framed into my seat – the feeling was electrifying.

My first adventure behind the wheel of the new Tesla Roadster Sport electric car on a recent summer night seemed so natural. 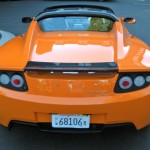 Susan Wood takes a Tesla for a spin. Photos/Kathryn Reed

For one thing, I’ve had muscle cars before. At 16, I owned a 1968 California Special Mustang. They only made them one year. Then, I moved over to a Chevy Camaro of the same year. This car bared a 327 V8 engine with dual exhaust. Responsiveness is something I’m accustomed to.

There’s a lot that’s different about this latest car made by Tesla of Palo Alto, the quasi darling of green technology, which went public this summer. Shares are expected to trade at about $14.

A low-maintenance engine plugs into a charging station, turning 240 volts over a 3.5 hour-period into 245 miles of driving luxury. This vehicle is anything but business as usual. (For gearheads, the electric, rear-wheel drive car is powered with a liquid-cooled battery pack consisting of 6,831 lithium ion cells.)

Its sexiness lies with its look and its feel. It has a body of a roadster (mine, a color called “very orange”) that appears to belong on a racetrack. Its light carbon fiber frame floats between zero and 60mph in three seconds. My racing bicycle made of the car frame’s same material would be hard-pressed to produce such a smooth and fast ride.

With the top off while pulling out of the Hyatt Regency parking lot onto Lakeshore Boulevard, I tried to see what this expensive toy could do. I was not disappointed.

First, I didn’t know the car was turned on because it’s so quiet. I pushed a button and suddenly I’m in drive. Other buttons include park and reverse. (If you’re backing up, a handy visual screen provides the view from the back end.) Needless to say, I kept reaching for a stick shift.

As with most vehicles in this price range, there is something for the cold of Tahoe: warmers on executive leather seats are included on the sport model. For the musically inclined, it also comes equipped with a special slot for iPods.

Then I noticed no power steering – something to be thankful for when I pressed on the accelerator. “Wow,” I thought as the car took off like a dart. I soon found the brake, as I headed for the loop from Lakeshore to Highway 28 and back.

“Tesla wanted to prove electric vehicles are not dinky golf carts. They can be sexy and practical for everyday use,” said Miki Sofer, Tesla’s client advisor and my passenger for the joyride.

The stares from people are worth capturing.

It was unfortunate Incline Village was busy on this Friday night. Otherwise, I would have tested that zero to 60 claim.

The 7-year-old company brought the vehicle to Tahoe for a demonstration weekend designed to get people who can afford it (not the media) to see what the vehicle is all about. They say the rear-wheel drive works in snowy Canada.

The name comes from Nikola Tesla, a mechanical engineer who discovered the alternative car.

Indeed, I would consider this car to be the alternative – in price tag as well. The roadster starts at $101,500 after a $7,500 federal tax credit, so it’s hardly affordable for every motorist.

When asked, Tesla executives said the car is so pricey because it is hand built. They also cited the cutting-edge technology. When further developed, the price should come down.

The ideal market, according to the company, consists of people looking for high performance vehicles like those driving Ferraris, Mustangs and Priuses.

“We see owners who love the car for its performance and design and also owners who are proud to drive the cleanest car on the road right now,” spokeswoman Khobi Brooklyn said of the 1,000 bought in 25 countries.

The thought is, electric vehicles’ time has come.

The California Energy Commission is funding 4,047 more chargers in the state to add to the existing 1,271. The one I drove stopped in Davis to get charged along its drive from the Bay Area to Lake Tahoe. UC Davis is considered the hub of research on the plug-in hybrid electric vehicle in the state.

Reducing greenhouse gases is all the rage now, especially prompted by the major oil spill in the Gulf of Mexico. Tesla officials provided no comment on that subject. But the energy commission suggests “EV” technology benefits the state “economically and environmentally” by putting employees to work and clearing the air. And although electric vehicles run on a grid fueled by nuclear and coal, energy analysts believe “de-carbonizing” the power line they run on would be easier to change than attempting to reduce carbon emissions from gas guzzlers.

The commission has figured the nearly 26 million registered vehicles operating in California produce about 40 percent of the state’s greenhouse gas emissions. In 2007, Californians consumed an estimated 20 billion gallons of gas and diesel fuel on the state’s roadways.