Enough information about the merits and hazards of banning plastic bags was disseminated Wednesday that the commission tasked with making a recommendation to the South Lake Tahoe City Council deferred its decision for a month.

“The goal is to reduce and eventually eliminate one-time use plastic bags,” Chairwoman Kirstin Cattell said at the beginning of the meeting.

Assistant City Attorney Jacqueline Mittelstadt told the 40 people gathered at the city offices at Lake Tahoe Airport that a court ruling came down last week calling the prohibition of plastic bags in one city illegal because adequate environmental reports were not done. 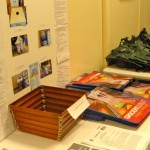 Mittelstadt also enlightened everyone that in 2007 the state Legislature ruled cities couldn’t impose a fee to use plastic bags. However, the state can. But two bills relating to that matter have died.

At the end of the meeting Cattell said she wants more details on the legalities of the issue before making up her mind.

Some of the people who spoke said waiting for the state to implement a fee is the right course.

Ellen Camacho spoke out in favor of a ban on plastic bags.

“We need to make it hurt to use plastic bags,” she told the commissioners.

Ellen Nunes, who runs Clean Tahoe, rattled off a slew of statistics about the billions of plastic bags produced in the world each year. She said this as slides of trash scattered about Tahoe — in marshes, the street and meadows — filled the screen.

She said Clean Tahoe picked up 108 tons of trash in 2009 — that’s just in South Lake Tahoe — and has nothing to do with normal trash service. How much of that was plastic bags she didn’t know.

Environmentally, that’s one of the arguments to ban the bags — that they get loose and animals ingest the toxins. Also, as the bags slowly decompose they leach chemicals into the soil and waterways. It takes hundreds of years for ordinary plastic bags to decompose.

But Ryan Kenny with the American Chemistry Council said environmentally plastic bags are better than paper when it comes to the production process. Kenny said plastic produces less emissions, use less water, less energy and more can be transported at once compared to paper bags.

Mike Murphy, who owns Road Runner gas station, said he would need a warehouse to store paper bags, whereas plastic are so compact.

He said a big issue is with tourists who don’t know what to do with their trash and who don’t believe a garbage company sorts recyclables by hand, like South Tahoe Refuse does.

Jeff Tillman of the refuse company said about 45 percent of what comes on the conveyer belt is pulled off to recycle. That number is expected to jump when the new facility opens this spring.

Education was a big theme of the discussion.

It was noted that consumers don’t recycle their plastic bags at grocery stores. Mike Schouten, owner of the local Grocery Outlet, said he estimates about 1 percent of the bags are recycled. They offer plastic bags and have reusable canvas bags for sale.

Schouten said he believes customers are speaking — they want the convenience of the plastic bags. He says this because only about 10 customers a day come in with reusable bags.

But that gets back to the education component — to make the public aware of what it takes to create plastic and paper bags, and what happens to those bags at the end of their life. And plastic bags are said to average 12 minutes of use before becoming trash.

Sustainability Commissioner Do Lee said he would like a cost analysis regarding how a ban would affect small and large businesses. He also wants to now the financial impact to customers before he decides how to vote.

Former Mayor Margo Osti is adamantly in support of banning plastic bags. She said the commission needs to work with Clean Tahoe, tell the council to have a dedicated code enforcement officer for trash related issues and should seek grants that could possibly provide reusable bags to everyone in the city for free.

Others who spoke questioned the logic in having South Tahoe ban the bags at stores when tourists come here with bags and so many locals shop off the hill where plastic bags are the norm.

Minutes before the meeting, Lake Tahoe News received a phone call from Jim Coalwell, who runs the farmers market in South Tahoe each summer. He said his organization is willing to cooperate with whatever decision is made, but hopes any change would be phased in.

Some of the discussion centered on getting rid of Styrofoam as well.

Jeremy Bauer, purchasing manager for Sierra-at-Tahoe, said all of the products at the resort are recyclable, with many made from corn resin.

“Our consumers have told us they appreciate that,” Bauer said.

David Hansen, director of engineering for Embassy Suites South Lake Tahoe, said he agreed with just about everything that had been said that afternoon, recognizing there are trade-offs with every decision.

Embassy doesn’t use plastic or Styrofoam. With its composting program and recycling efforts, in 2009 STR picked up 45 percent less waste at the hotel.

Speaking on behalf of the Lake Tahoe South Shore Chamber of Commerce, Hansen said, “We support your decision if it makes economic and environmental sense.”

The Sustainability Commission is expected to make a recommendation at its March 3 4pm meeting.