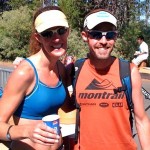 Sean Meissner of Sisters, Ore., is familiar with the Lake Tahoe Marathon race course, having won the eventâ€™s Tahoe Triple (three marathons in three days) four times in the last few years. Meissner proved he could also win gold in the marathon division, taking first this year with a time of 2:58:02.

It was hometown favorite Gretchen Brugman of Truckee winning the womenâ€™s marathon division with a time of 3:34:24, setting a personal record on the Lake Tahoe route. Like Meissner, Brugman isnâ€™t new to the race course and finished first in the Tahoe Tripleâ€™s women division in 2003.

Lynyrd Skynrod of Reno also proved that past Tahoe Triple experience is a plus having one that race in 2007, celebrating at the finish with a cigarette. This year, he again was first in the Tahoe Triple with a three-day time of 2:43, 2:54 and 3:02.

The Lake Tahoe Marathon 72-Mile Bike Race record was shattered Saturday for the second year in a row, when Curtis Doman of South Jordan, Utah, won the race by a mere half-a-bike length with an official time of 2:55:21.77. First place female went to Katrin Tobin of Santa Cruz with a time of 2:57:57.58. In the masterâ€™s division (over 40 years), Tahoe Cityâ€™s Todd Weitzenberg won with a time of 2:55:22.04, along with Nancy Harrison of South Lake Tahoe with 3:14:10.19.

For a complete list of results for races conducted throughout Marathon Race Week, go to www.laketahoemarathon.com.