Before construction resumes at the hole in South Lake Tahoe, some deconstruction is going to occur.

Eight columns out of the nearly 100 that are in the ground need to be taken out because they don’t meet current standards to withstand an earthquake. Two changes to California’s building codes have occurred since the foundation for the Chateau project was poured a handful of years ago. The columns need to be bigger.

The demolition permit is expected to be issued today by the city to Tahoe Stateline Ventures. 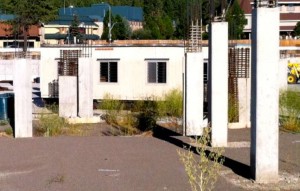 A construction trailer is at the Chateau site, with a bevy of activity likely to begin next week. Photo/Susan Wood

Tahoe Stateline Ventures is the company created by Owens Financial to develop a section of what was to be a $410 million hotel-retail-convention center in the city near the state line and across Highway 50 from Heavenly Village.

On Thursday, TSV will be before the South Tahoe Public Utility District board seeking approval of the contract to construct the water main.

All of the site work for construction of the 14-inch water main is slated to be done this building season.

Once the agreement is signed by STPUD, TSV officials will take that to the city in hopes a building permit is issued on Friday.

No contract is needed between the city and developer because this is now a completely private endeavor. Before the bankruptcy, when the entire 11-plus-acre site was to be developed, the agreement was the city would issue millions of dollars worth of bonds to pay for the convention center that it would ultimately own. The city was also going to own the open spaces.

Now the city doesn’t have ownership to anything regarding this project.

Construction trailers are on site and preconstruction work – like cleaning up the area – has been occurring. Real construction could begin Monday.

SMC Contracting is the general contractor for what is now an $11 million project on only part of the acreage. SMC was the lead the first time as well.

A temporary sidewalk along Highway 50 will be installed and the foundation for the retail will go in this building season. Work will continue through the winter, with completion – including landscaping – coming about this time next year.

“The expectation is retailers will be able to initiate their tenant improvements in late spring. Then in late summer, early fall they could be open for business,” Lew Feldman, attorney for TSV, told Lake Tahoe News.

About a half dozen business are expected to move in.

The corner of Highway 50 and Stateline Avenue was always intended to be a restaurant. McP’s is going to move there; which was also the original plan. The bi-level building will have one story below ground, one above ground. Outdoor seating, fire pits and a kitchen that would be capable of producing real meals are part of the plans.