While the four votes by the South Lake Tahoe City council on Tuesday concerning the Chateau project were 5-0, they did not come easily or without some reservations.

What it means is part of the concrete and rebar on the northwest corner of Highway 50 and Stateline Avenue will be covered starting next month, with completion of that phase expected next year.

SMC Contracting, which built what exists today, has been hired by the property owner to do the next phase.

“The design is based on continued vertical construction. Basically it’s a temporary roof that could be permanent,” SMC’s Joe Stewart told the council June 11. 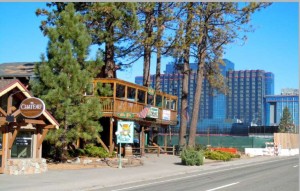 The Chateau project is about to become a partial reality beyond rebar and concrete. Photo/LTN file

The next phase is all retail along the highway from the state line to almost the existing McP’s Pub. McP’s will take over the corner location, as was originally planned.

This building was three-stories in its original concept. The top two floors were to be roughly 80 tourist accommodation units of some kind. They still will be, but in another phase of construction that today is called Phase 3.

“I think the whole building is what is best for the community,” Councilwoman Brooke Laine said.

But if that were to happen, the top two floors would be shells. Plus, it would add about another $8 million to construction costs.

The nearly $11 million project that is slated to break ground in July is called Phase 2. Phase 4 would be the convention center and high-end hotel. A stipulation is that before Phase 4 can begin, Phase 3 must be finished.

After 5½ hours of discussion June 11, the council agreed to modify the phases. This means one story instead of three will be built.

Councilwomen Laine and JoAnn Conner initially proposed half of those 10,000 square feet be used in this phase and the remainder down the road.

Feldman said his client had no other source of CFA.

The Tahoe Regional Planning Agency has made CFAs a commodity with value instead of letting free market dictate how much can be built. The same goes with tourist accommodation units – or hotel rooms. That will likely to be an issue with future phases.

The council agreed to take CFA out of the environmental cache – which has not been tapped in the decade since the Safeway was built – along with half of the community plan CFAs. This leaves the developers needing to find 2,858-square-feet.

Owens Financial has some CFA on other parcels it owns in the project area, but had not wanted to use those for reasons that were not disclosed at Tuesday’s meeting.

Of the $11 million to construct the retail, about $2 million will be spent on stormwater (aka environmental improvements), landscaping, Highway 50 improvements and other upgrades.

Performance and construction bonds are required at a minimum of $10 million each. This means if the developer is unable to finish the project, the city would be able to trigger the bond to get the job done.

Such bonds were not required by the city before the now bankrupt Lake Tahoe Development Company (LTDC) broke ground in 2007.

Putting the developed parcels under one map was also never done. This in turn led to much of the problems that exist today – 29 parcels for one project. The six parcels that will be built on will have one map, all sides say, but the remaining parcels are owned by Owens and City National, with Randy Lane of LTDC in litigation with the McP’s parcel.

Randy Faccinto, attorney for City National, told the council his client is looking for a buyer of the property it owns and is not interested in becoming a developer.

Owens has spent about $30 million in loans on the original project, another $11 million to buy additional land and to pay back taxes.

Swanson said the project is estimated to bring in between $200,000 and $300,000 in sales and property taxes to the city each year.

On Tuesday, the council approved the design changes, commercial floor area allocations, abandonment of city owned roads that will be built on, and acceptance of the right-of-way from Caltrans.

Here are renderings of the latest Chateau project.