Stateline Ventures – that’s the name of the company that will be building the next phase of the convention center project.

Bill Owens of Owens Financial foreclosed on the remaining parcels May 9 and formed the new company. It is not known who the other partners in that company are.

Owens Financial has title to the bulk of the properties on the nearly 11-acre site near the state line that at one time was to be a convention center, two hotels, retail and open space.

The building permits from the city and Tahoe Regional Planning Agency expire in July if nothing is done. That is a big reason Owens wants to proceed this summer with something. That something is retail that would go along Highway 50 and a much larger McP’s restaurant than what exists today. 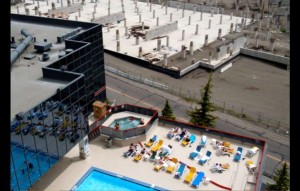 Guests at Harveys may have something other than concrete and rebar to look at later this summer. Photo/LTN file

The footprint cannot change, nor the main intent of the buildings. But it can be built in more phases than were originally planned for, which is what is being proposed. The type of lodging in terms of it being timeshares, condos, fractional ownership or traditional hotel would be up to the developer.

City Manager Nancy Kerry said the design elements would be different because everything is not being built at once.

While South Lake Tahoe officials have yet to sign off on any work to be done on the infamous hole near Stateline, a lighting designer sent out a press release last month stating they have started work on the project.

“We’re thrilled to have commenced work on Phase II of the Chateau at the Village project, working in partnership with Lee Harris, owner of Light + Space of Reno,” Jim Sultan, senior lighting designer and project manager of Studio Lux, said in the April 24 press release. “Phase II encompasses the completion of the underground parking garage, construction of the shells of retail spaces and the signature restaurant McP’s Pub, and outdoor public spaces and walkways alongside Stateline Avenue and Highway 50.”

Kerry this week told the council that staff received a detailed letter last week from Owens’ people regarding what is planned for the six parcels. Staff as of Tuesday was still going through the documents.

The Studio Lux press release says, “The lighting design will incorporate cutting edge lamp and optical technology to illuminate the project’s facades, walkways and public spaces, featuring LED light sources that exceed current lighting and California LEED compliances. Chateau at the Village will weave lighting within its timber frame and stone construction to artfully accent the project’s striking facades while providing a continuous illumination for pedestrian walkways. Architectural and decorative lighting will also play a key role in Phase III of the project, consisting of vacation-share condominiums, a restaurant with two bars and a hotel with a grand lobby that evokes the style of traditional ski lodges.”

Before any of that happens, the Planning Commission must give its approval. The commissioners’ regular meeting was Thursday. It’s likely a special meeting will be called for May 23. If the applicant can’t make that date, it would have to be in June based on the commissioners’ availability.

The City Council has said it wants to sign off on everything involving this project. June 11 is the only date that group is planning to meet next month. A special meeting could be called just for this project.

It is not a slam-dunk that the council will say yes. A road that used to go through what is now rebar and concrete still belongs to the city so that has to be abandoned. Had the former developer, who went bankrupt, consolidated the parcels as is customary in these types of projects, that road would not be an issue today. There could be other items the council will need to approve even though permits are in hand.

And at that June meeting the city will likely be without in-house legal counsel because the current attorney will have left, the new one doesn’t start until July and the second in charge is likely to be on leave.