Joe Stewart with SMC Contracting put in the concrete and rebar at the convention center project in South Lake Tahoe. His crew is ready to resume work.

Pete Joseph was ready six years ago to move his McP’s Pub into a much larger building that would sit near the corner of Highway 50 and Stateline Avenue. He’s still ready to move.

MBA Architecture and Design in Reno came up with the original plans for what is still being called the Chateau project and they are back in the game today figuring out what the next phase will look like.

Randy Lane with the now bankrupt Lake Tahoe Development Company was to develop the $400 million project. Today he is offering advice to Bill Owens, who now owns the majority of the 29 parcels that make up the nearly 11-acre site. 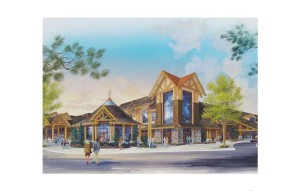 The original rendering of the Chateau project by MBA Architecture and Design.

It was the South Lake Tahoe City Council of Hal Cole (he was mayor), John Upton, Mike Weber, Ted Long and Kathay Lovell who on July 11, 2006, approved the owner participation agreement. This was the contract for what was to be the largest development in the city limits. It included two condo-hotels, a 93,000-square-foot convention center and about 57,000-square-feet of retail space.

Next week city officials and the latest project proponents are going to have a sit-down about the next steps. The Owens group has submitted plans the city keeps calling incomplete.

While council members would not normally have to sign off on modifying the number of phases when a permit has already been issued for a project, they have requested to do so after the planning commission takes action. Cole will get to vote again. Joining him are electeds Tom Davis and Brooke Laine, who with their pasts, are well versed on projects in that area. New to voting on items in this location are Councilwomen Angela Swanson and JoAnn Conner.

The plan is to develop about 20,000-square-feet of retail and 9,000-square-feet of food and beverage that will mostly span Highway 50, but will go down Stateline Avenue a bit, too. The section is a bit triangular, with the point being at the west side before McP’s Pub. It will be divided on the highway by a driveway that will access the underground parking.

The concrete that is there is the floor of the garage. While the original plan never had enough parking spaces for the entire project, a bit of irony is that this phase being proposed would have more parking than should ever be needed.

Back in the day, Jim Marino who is now capital improvements project manager for the city, and Hilary Roverud, who now runs the planning department, told the council it should not approve the project because the parking plan was inadequate. The electeds ignored the professional advice.

On the day the OPA was signed then Redevelopment Agency Manager Gene Palazzo said a performance bond was still needed.

The official city minutes from that meeting say, “Palazzo explained that in the event the developer were unable to finish the project, the performance, labor and materials bond provide the ability for the city to step in and get the project completed. Palazzo noted that this item was not included in the agreement and required resolution.”

Someone dropped that ball and was never held accountable for never securing that performance bond.

Also in the minutes from that meeting is talk about the Highway 50 tunnel.

The minutes say, “Palazzo remarked that per the OPA, the developer was required to construct the underpass tunnel connecting Project 3 to the Park Avenue Project; however the OPA only required that the developer maintain onsite improvements, of which the tunnel was not a part. Palazzo noted that this item was not included in the agreement and required resolution.”

While the OPA is a rather thick document, it is now useless. City Manager Nancy Kerry explained because it was an agreement between the developer and the city’s Redevelopment Agency it ceased to exist as a legally binding document when the state dissolved the Redevelopment Agency.

So, while the permits from the city and Tahoe Regional Planning Agency are in effect, there is no contract. This means inadequate parking will be an issue at full build-out and that there is no way other than crosswalks at Stateline and Friday avenues to get from the Chateau site to Heavenly Village. This means crossing a five-lane state highway. 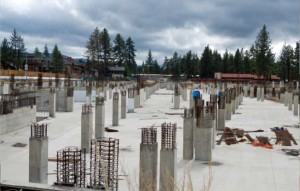 Work on the hole could begin in three months. Photo/LTN

It also means what was supposed to become a city-owned convention center is now likely to be a privately operated conference center. Through the Redevelopment Agency and tax increment the city was going to have money invested in the original Chateau project. It was guaranteed to have access to the convention center for a predetermined number of days. That is out the window even though Kerry would like it to be a negotiating point when appropriate.

She doesn’t understand “how any city manager could allow this to get to the condition it is because a consolidated parcel map would have been standard.” (Dave Jinkens was city manager when the OPA was signed, when construction began, when work ceased and when LTDC filed bankruptcy.)

Before any of that happens, though, the city needs to receive a plan from the developer that is complete.

“Nothing occurs until we see documents of ownership,” Kerry told Lake Tahoe News.

Stewart, the contractor, has been talking with Owens, but as of today a contract has not been signed. That would be a bit premature without having received the city’s OK to start again.

“Rumors have been going on since the day they shut that down. I’ve never felt very confident anything would happen on that job until now,” Stewart told Lake Tahoe News.

In addition to putting in the foundation for the Chateau project, SMC built most of the retail at Heavenly Village as well as the transit center next door. SMC also built the Tamarack Lodge at Heavenly, Zephyr Lodge at Northstar and all of the new buildings at South Tahoe High School.

Stewart said it wouldn’t be weird to work on a small portion of what will be a larger project. He likes the idea of having a large area for staging.

“The hardest will be along Highway 50 that we would be doing this year. Being able to focus just on that is nice from a contractor’s standpoint,” Stewart said.

McP’s also doesn’t have a signed contract in place. But Joseph said he’s been in touch with Feldman about his continued desire to occupy a much larger plot of real estate.

The two-story building that is proposed would be on the street level and below ground.

Joseph is familiar with change. Eminent domain forced him out of his spot across the street to make way for Heavenly Village. He was ready to move into the same spot that could be under construction this summer, but instead has been operating on an island of sorts for six years. McP’s is at the west end of the fence that surrounds the concrete and rebar.

He’s been in business for 10 years and wants to stay in Tahoe. If he isn’t part of the Chateau project as originally planned, he told Lake Tahoe News he doesn’t know what the future holds for him.

Joseph is banking on another move – just down the street.

“The building would have a lot more character and that would be helpful. There would be outdoor dining, fire pits, sliding windows from indoors to out,” Joseph said.

The roof design makes it look like a freestanding building.

In addition to the city, the developer needs to work out issues with Caltrans still.

Sidewalks and a streetscape that match what is at Heavenly Village are planned.

The city is going to insist the entrance from Cedar Avenue be more than driving through a construction site. It must be a safe, finished driveway.

“As you pull in off Cedar there will be some sort of wall treatment. You won’t have the sense you’ve been turned loose in an underground construction site,” Feldman said. Improvements to Cedar Avenue will also be made.

Feldman would not disclose the amount of investment Owens plans to make in this initial restart phase, but said it would be eight figures.

The theory is having something usable in the ground will spur someone to come in to develop the rest of the project.

The original project was supposed to be a hotel-condo project, but condos are not a sellable product today. But what the market may bear when someone comes in to build future phases remains to be seen; as well as what that person would want to do.

“There may be plan revisions. That’s not uncommon for a larger scale project to amend the permit to reflect changes in the marketplace,” Feldman said.

While there are ideas about the types of businesses that might occupy the retail, negotiations will not begin until the green light for construction is given. Nor is it being disclosed how many storefronts there might be.