What would Northstar be like if skiers were whisked to the village via a gondola from the lower parking lot, if 300 acres of terrain were added, and those runs were accessed by an additional seven lifts?

Skiers and snowboarders will get to know the answers firsthand in the next decade or so if Vail Resorts has its way.

The Northstar Mountain Master Plan is on the street for people to comment on, and Placer County officials to review before the environmental documents are created. It is all about the mountain and does not include a real estate component. 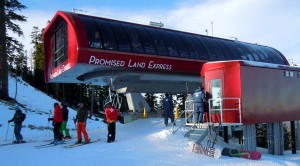 Vail Resorts has spent more than $30 million to upgrade Northstar, including the Promised Land lift that opened last season. More money is on its way. Photo/LTN file

Even though Northstar is on private property and the resort would not normally have to go to the level of detail that it is, the Martis Valley settlement required a bit more depth to planning.

“This plan is based on the overall Habitat Management Plan,” Northstar COO Bill Rock told Lake Tahoe News. That plan was developed in conjunction with Sierra Watch and other conservation groups. Those entities, according to Rock, have also been privy to the details of the master plan as Northstar was formulating the document.

“This plan really is designed to be a real benefit to the people who are already here. No additional parking is proposed in this plan. That is what limits access to resort,” Rock said.

Parking has long been one of the biggest complaints about the ski resort. Lodging wiped out where people used to be able to park within walking distance to the village and slopes. Now people are bused from close to the entrance off Highway 267.

Rock says the gondola that is proposed to take people to the village from the parking area will get buses off the road and “provided a better experience for guests.”

Other lifts are designed with the idea of getting people dispersed throughout the mountain faster and more efficiently. A lift would start in the village to take riders to the top of Lookout Mountain.

“This outlines our vision for the next 15 years – what we might do at the resort.” — Bill Rock, Northstar COO

“We have a great plan to go out onto Sawtooth Ridge. It will absolutely enhance the skier 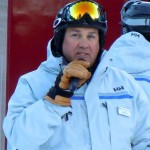 To help Mother Nature, more snowmaking apparatuses would be put in the ground. Snowmaking helped save last season at so many Tahoe-area resorts.

“Well-engineered, thoughtful snowmaking is a critical piece of any resort no matter where it’s located,” Rock said.

He said Northstar has enough access to water on the mountain so its reservoir storage will not need to be expanded. Rock added that snowmaking is good because it replenishes the groundwater supply.

Things that are included in the master plan that are likely to get built right away include expanding the Summit Deck and Grill (which is near the top of Comstock and Backside lifts), possibly putting in a warming hut on the backside of it, adding other bathrooms and warming huts on the mountain, and minor food and beverage options.

In this PDF of Northstar’s plans, it shows skier service areas in yellow as well as where other changes could occur. For now, those are areas where resort officials believe they want to do something, but don’t have the specifics of what could go there.

“This outlines our vision for the next 15 years – what we might do at the resort,” Rock said.

Besides needing Placer County’s stamp of approval, the Vail Resorts board of directors must weigh in as to when the checks would be written for the expansion and what gets done first.

What build-out of the components in the proposed master plan would cost are not being discussed because a time line to build them has not been established. Plus, this document is mostly about the big picture, and not specific details of individual projects.

While this is a winter master plan, Rock said Northstar would like to enhance its summer offerings at some point, too. A separate plan would be submitted to the county for those ideas. Things being talked about include a mountain coaster that is a toboggan-like device that would go through the forest on rails, family-friendly bike trails, and a zipline and canopy tours.

• More information may be found online.

• A meeting to receive comments on the scope of the environmental impact report will be Nov. 28 at 10am at the Lakeview Suite, North Tahoe Event Center, 8318 North Lake Blvd., Kings Beach.