LONDON – Afternoon tea in England started as a pick-me-up, but I found it to be such a relaxing experience I was ready for naptime.

The history of this ritual dates to the early 19th century when Anna, the 7th duchess of Bedford, would have afternoon tea in her bedroom.

“Later friends were invited to join her in her rooms at Woburn Abbey and this summer practice proved so popular that the duchess continued it when she returned to London, sending cards to her friends asking them to join her for ‘tea and walking the fields’,” according to the Cadogan Hotel in London. 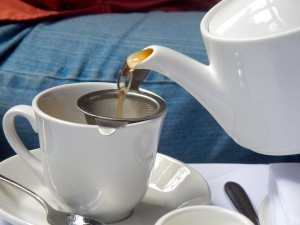 Afternoon tea is a ritual in England. Photos/Kathryn Reed

Others followed the duchess’ lead by hosting teas, and thus the ritual spread to all classes.

“Traditionally, the upper classes would serve a ‘low’ or ‘afternoon’ tea around 4 o’clock, just before the fashionable promenade in Hyde Park. The middle and lower classes would have a more substantial ‘high’ tea later in the day, at 5 or 6 o’clock, in place of a late dinner,” the hotel explains in its Afternoon Tea menu.

Walking into the parlor of the stately Cadogan Hotel, which is close to the high-end shopping on Sloan Street, I thought perhaps we should have petticoats and other attire of days gone by. Despite our “tourist” wardrobe, the staff didn’t turn us out onto the street.

Being there during Wimbledon meant the hotel was offering a special for the renowned tennis tournament. A group had already nabbed the table showing the match of the day. But we were still able to enjoy some of the tennis fun with the Apple Cream and Almond Puff Tennis Balls.

A variety of teas from India and China are on the menu. Sue picked the Jing Assam Breakfast – a black tea, while I chose the Jasmine Pearls.

With a strainer over the cup, our server poured the steaming tea into our cups. The strainer prevents leaves from getting into our cups. We each had a pot that later the server added more water to.

The three tiers of food may be called finger food, but it was a meal for the two of us and not just a snack. I have never been a fan of scones, but after eating the apricot creations made by pastry chef Marie Bolland, I could have these every day.

Tiny sandwiches ranging from cucumber and cream cheese to egg salad filled the first tray. Then the scones. An array of desserts, including the tennis balls, topped the ensemble.

At 22.50 pounds it’s a bit pricey, but considering this turned into a meal for us, it was worth it. While it’s not something I would pay for if I lived in London, except maybe for special occasions, I would definitely recommend high tea as something to experience while on vacation. And the Cadogan Hotel made the ritual seem so regal even for commoners.