LONDON – War is hell. And sometimes you don’t have much say about whether you will be a soldier. Your country says fight. You don the uniform or you flee and face prison.

But for the animals, well, they never have a choice. The cavalry charges on. The nays of the horses are not heard as a resistance, if they are heard at all. In WWI almost 10 million horses died on the battlefield. 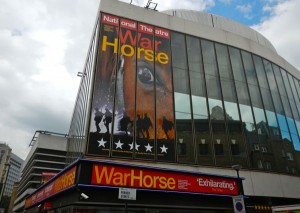 While "War Horse" is sold-out most days-nights in London, on occasion tickets are available at the theater the day of the show. Photo/Kathryn Reed

Joey. He was one of those horses that fought in the battles of World War I and fought even harder to live until the conflict was declared over.

While Steven Spielberg brought the story of Joey to life on the big screen, it was Michael Morpurgo who in 1982 published the book “War Horse” from which the screenplay was adapted.

In 2007, “War Horse” became a theatrical sensation in London at the National Theatre. Today it continues to be performed for sold-out audiences at the New London Theatre on the West End. It comes to the Curran Theater in San Francisco starting Aug. 1.

I cried during the movie, then earlier this month in London at the play and later during my trip abroad as I read the book.

The book, as I expected, goes deeper into this incredible horse’s life. In fact, it is told through his voice – what he sees, hears and feels.

Before the book begins, Morpurgo writes, “In the old school they use now for the Village Hall, below the clock that has stood always at one minute past ten, hangs a small dusty painting of a horse. He stands, a splendid red bay with a remarkable white cross emblazoned on his forehead and with four perfectly matched white socks. He looks wistfully out of the picture, his ears pricked forward, his head turned as if he has just noticed us standing there. … those who look more closely will see, written in fading black copperplate across the bottom of the bronze frame:

“His story is written so that neither he nor those who knew him, nor the war they lived and died in, will be forgotten.”

While the book is my favorite of the three formats of “War Horse”, the play is magical. It’s astonishing to see the horses “come to life” through puppetry.

When I was told puppets were involved, I envisioned strings from the rafters. It’s nothing like that.

In fact, these horses in many ways seem real. The puppetry does not distract from the show. Three people operate each horse – two underneath, and one at the head.

I suppose it took some imagination to be convinced these were horses, even galloping at times, but it was unconsciously that I convinced myself.

“War Horse” is definitely a book worth reading and a play worth seeing.