A life-long advocate for social change, Joy Rothschild never stopped fighting for what she believed in.

In her 63 years she inspired others to be part of the change she sought. She was not one who just talked a good game, but instead spent time and money supporting the issues that were important to her locally and nationally.

Joy passed away Aug. 2 after a courageous battle with cancer. 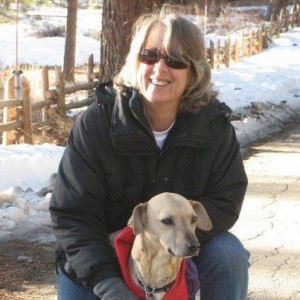 Joy Rothschild and her dog AJ.

A native San Franciscan, she was born Jan. 13, 1949. Growing up in the Bay Area at a tumultuous time inspired Joy to speak her mind, get involved and become an activist.

In the late 1960s, Joy traveled to New Orleans where she worked for the rights of farm workers alongside Cesar Chavez.

She worked on the campaigns of John Burton, Sala Burton and Dianne Feinstein. One of her proudest accomplishments was working on Feinstein’s 1984 mayoral recall campaign — in which more than 70 percent of the voters said yes to Feinstein.

Shortly after that campaign Joy moved to South Lake Tahoe with the intent of unionizing the culinary workers at the Stateline casinos. While that bid failed, what she gained was a love for Lake Tahoe. She called the area home ever since then.

In 1987, Joy began working as an instructional aide for Lake Tahoe Unified School District. While at Al Tahoe Elementary School she became involved in the classified union and served as its president for several years. In 1989, Joy transferred to South Tahoe Middle School where she worked as a “Challenge” class aide for grades 6-8. These were classes for youths who were smart, but not succeeding in school. Joy connected deeply with youth who were troubled, keeping in touch with many into adulthood.

“She was beloved by the kids for her compassion, humor, wit and kindness. She could get to the toughest kid. And she was so good at it,” Cindy Cowen, a teacher at STMS who worked with Joy, said. “She could make the kids laugh, cry, and be better human beings.”

Later Joy began working for the district’s truancy program and then the McKinney Vento program for homeless students at the district.

Joy and Cowen put together an instructional book titled “It is Our Business” that is used in part today in LTUSD and Alpine County.

She retired from the district in 2003.

Joy’s desire to help troubled youth extended beyond LTUSD. For many years she was a volunteer with Court Appointed Special Advocates. She was also a staff member for CASA El Dorado County.

“Joy was an exceptional advocate for the most troubled youth who needed an honest, straightforward friend and advisor. She formed trusting relationships because she genuinely liked ‘her’ kids. Each youth that was touched by Joy, knew they had a friend for life,” Wendy David, former CASA site manager, said.

Much like there are trail angels for people doing long hikes, Joy took that concept in a different direction. She regularly gave scholarships to Mount Tallac High School students. Not one to want public recognition for her deeds, she would write checks to various organizations that needed help without the direct beneficiaries knowing where the money came from. They include, but are not limited to, Tahoe Magic, Zawadisha Fund, and Ally Club at South Tahoe High School.

“She has been my anonymous Ally donor for the past several years, and it is because of her that I was able to do much of the wonderful work we have with Ally. She is the reason we attended the gay prom, the reason we had snacks each week, and the reason that I felt I was doing the most good possible,” Bridey Heidel, Ally advisor and South Tahoe High School teacher, said. “Joy is also the reason I became a teacher. After seeing me substitute teach one day, she held my face and said, ‘This is what you must do. It’s what you were meant to do.’ I never planned on being a teacher … until that moment.”

Joy participated in every local production of the “Vagina Monologues.” This year she was honored as the Vagina Warrior for her dedication to making the lives of women better.

Joy at times was an active member in the local Democratic Club and always a passionate Democrat.

She loved to hike and cross country ski throughout Lake Tahoe.

A celebration of life will be Aug. 14 at 5pm at the home of Wendy and Kerry David, 1300 Keller Road, South Lake Tahoe. Please bring a favorite dish or bottle of wine to share.