AMESBURY, England – A flicker of flame carried by four-time gold medalist track star Michael Johnson emerged through a rare, cloudless sunrise at Stonehenge, setting a dramatic stage for the planet’s touchstone for goodwill and humanity – the Olympic Games.

With his signature smile and svelte physique, the 44-year-old American athlete brought the torch on July 12 at 5:09am to the ancient National Heritage Site prior to his official, 300-meter torch-bearing “leg” at the Salisbury Cathedral a few hours later.

The world record-holding sprinter, who took gold in 1996 at Atlanta in the 200- and 400-meter events, made an outrageously slow lap around the spiritual, circular stones as the sun beamed over the “heel stone” and through the structural rock formation. It was a magical moment – one the media from around the world wouldn’t have missed. He repeatedly described the event as “an amazing experience” as reporters held onto every word.

When asked by Lake Tahoe News if the lap was his slowest run, he replied: “Pretty close, but well worth it.” 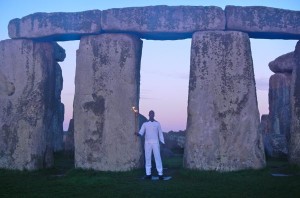 Johnson posed with the 31-inch-long, 2-pound torch for the cameras alongside Amelia Clifford, a young Salisbury track star who ran the torch the day before. She was elated, while standing before other gatherers like fellow torchbearer Phil Monk. The local teacher was nominated by his students and colleagues at the Stonehenge School. It was rather appropriate for Monk to be there. He knows the history and magnificence of the Sarsen-stone site built in BC 2400 by hundreds of men over 30 million hours using wooden platforms on rollers and ropes to bury them 6 feet under.

To this day, the burial site that is considered one of the world’s most recognizable attractions makes up a place for reflection and rebirth – including that of the seasons. Thousands of people descend on Stonehenge for the summer solstice each year. The appearance of summer dominated the discussion that morning as much as the arrival of the torch, which is made of gold to represent the qualities of the flame – brightness and the warmth of the light it shines.

“We haven’t had a morning like this in months,” Monk said. England has endured one of its wettest summers in decades.

Spirits were further lifted eight miles away at 7:45am when Johnson arrived to carry the torch in Salisbury in front of thousands lining the streets waving British flags. The town’s celebration the day before brought out 35,000 Olympic fans to witness the spectacle.

The Olympic torch carried by 8,000 people in the relay was designed to touch at least 95 percent of England’s population within a one-hour distance of 1,018 communities on its twisty, 8,000-mile route.

The traditional lighting ceremony took place on May 10 at the Temple of Hera, Olympia, home of the Ancient Olympic Games. The Olympic flame traveled through Greece before a British jet labeled “Firefly” picked it up for its journey through England, which started at Land’s End in Cornwall. The torch also had a one-day appearance in Dublin, Ireland, on June 6. A little more than a month later, it graced the streets of England’s original capital, Winchester – where King Arthur held court with the Knights of the Round Table in the 12th century. The banners were still flying over High Street days later.

Leading up to tonight’s Opening Ceremony, the torch relay will have lasted 70 days and marked 66 evening celebrations, six island visits as well as a variety of types of transports – by foot, plane, train, watercraft and even on a Ferris wheel known as the London Eye.

Each ceremony marked yet another demonstration of rural community pride. In the tiny town of Bowness, more than 10,000 Olympic fans gathered to see the torch transported by a 122-year-old steamboat over Windermere Lake in the Lakes District of northern England, a land of captivating natural beauty.

Jacqui O’Connor, who works for Windermere Lake Cruises, told Lake Tahoe News a regatta of boats flanked the MV Tern steamer with 175 people on board for its journey across the lake which is lined with green meadows, castles and estates. She was among them, along with a group of schoolchildren.

“It was amazing. The kids were so excited,” she said.

Community rural pride represents a common theme on the torch relay route, which culminated with its last stop in Westminster July 26 before making its way the following day into the Olympic Park for the Opening Ceremony.

A record 4 billion viewers are expected to watch a portion of the telecast.

Signs of London hosting the 2012 Olympic Games blanket one of the world’s most exciting cities.

Posters line the escalators of Underground stations. The London Heathrow Airport has opened a temporary terminal to handle an influx of anticipated passengers descending on the host city. Stands for seating to watch the triathlon and marathon swimming events have been erected at Hyde Park. The park had already staged a number of parties and concerts before the Olympics even started.

The majestic Tower Bridge serves as a backdrop for giant Olympic rings. Inside the tunnel, an educational display highlights other host cities.

London is the only city that has hosted the Summer Games three times – 1908, 1948 and 2012. The vision of this year’s Games is sport, education and culture, a fitting tribute to a city long known for its multi-culturalism. And this year, sports in Britain have captured a world stage – from Bradley Wiggins’ winning the Tour de France to Andy Murray reaching the finals at Wimbledon, where he sent droves of prideful English into the pubs and tea rooms to witness the first British male to make the finals in 76 years.

For the first time, the All England Club at Wimbledon stands ready to host Olympic tennis. The grounds are tastefully immaculate, nearby residents are excited and U.S. tennis greats like the Williams sisters are eager to go for gold in doubles.

The park is the place

Nowhere is the host city more electric than the Stratford neighborhood in East London, an older, industrial area revitalized to become home of Olympic Park.

Helicopters fly overhead as part of the security functions to build the Games’ Olympic Park, which house the stadium, aquatic center, water polo arena, Velodrome and BMX track in eight venues, along with the opening and closing ceremonies. Seating for all the events in just that 500-acre area tops 156,000. A dozen venues have gone up outside the park and 10 outside London.

With the opening, a countryside scene with animals and a Queen Jubilee bell with a quote from the play “Tempest” make up the latest hints to a hush-hush opening put on by Oscar-winning director Danny Boyle, Blue Badge Tour guide Helen Bartolome said, while taking a group of about 30 people around the park’s perimeter. The tour costs 14 pounds and lasts two hours.

The opening will hit a crescendo with the lighting of the Olympic cauldron, following the flame’s 8,000- mile journey. Bartolome said taking the torch all through the country quelled the criticism that the Games were “London centric.” Instead, this was England’s Olympic Games.

On the tour, Sarah Hobbs of Kent County agreed. She not only witnessed the torch relay, she touched it at the McDonald’s after it traveled through her rural homeland.

“It was so inspiring,” Hobbs said, adding she was surprised the torchbearer let her get so close.

With London being awarded the Games in 2005, three components were addressed: The regeneration of the economically depressed end of East London; the making of arguably the “greenest” Games in terms of recycling and reconstruction; and the encouragement of the public to get into sports activities.

“There’s an enormous initiation (for sports) in the schools,” Bartolome said, as wide-eyed tour attendees took in the scenery. Some people have gone on the tour numerous times to see the progress. On this one, the sounds of jackhammers and metal poles hitting the ground marked the ground zero where the Queen Elizabeth Olympic Park now stands.

To pull off such an endeavor, the city had to commit to cleaning up the water and contaminated land, as well as remove 52 electric pylons, bury miles of cable, erect a power station and move companies through the redevelopment process.

To view the area, it’s hard to imagine the place as it was. Now, boats line the canals, ping pong tables stand ready for players, bustling shoppers tour the major Stratford-area complex anchored by the John Lewis department store. The retailer set up a viewing platform so people can see the park being built under their feet.

Some venues like the shopping center represent infrastructure designed to stay long after the Olympics to benefit a host city. Others, such as the water polo arena will come down because as Bartolome put it: “Only two out of 30 people know someone who plays water polo.”

The guide also pointed to the modern architecture from the highway overpass to tell the group how even the stadium – which used only half the steel of Beijing’s Olympic Games to promote energy efficiency — will be scaled down to 25,000 seats.

“We don’t need an 80,000-seat stadium in Stratford,” she said. The group looked out at the skyline in awe of how the construction and deconstruction would come about. Looming overhead was a helter-skelter of a 35-story structure called the Arcelor Mittal Orbit, named after a steel magnate who erected the building with a viewing platform as art meant to enhance the Games.

Nearby, housing for the 13,000 athletes will be transformed into apartments after the Games.

This is one example of London’s venues being designed as sustainable.

With all that is built, whether permanent or temporary, London stands poised to make a difference this year.

Tour attendees stood silently to read the sign outside the gate that is intended to capture the spirit of the grand-scale event and make the monumental effort worthwhile: “There would be no goose bumps, gasps, pounding hearts, tears of joy, records smashed, strangers hugged or whole world together without…”

In two weeks, you finish the thought.

Previous post : Emergencies come in all sizes — are you ready? Next_post : Marriage in America evolving as people wait to say ‘I do’