BATH, England – As I swirled in the water, she cradled me in such a personal and intimate way, I was immediately transported to thoughts of how a baby might feel being held by her mother.

There lies the experience of receiving a Watsu massage in the hot bath at one of the most renowned spas in the world – the Thermae Bath Spa in the center of the town of Bath. 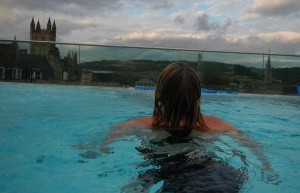 Susan Wood looks out onto Bath from the Thermae Bath Spa. Photos/Kathryn Reed

The place is like no other. It’s where mineral-rich waters were reported to have drained off limestone rock from the hills into a lower, marshy plateau where Romans bathed 2,000 years ago because they believed the water was sacred and had healing powers. Hence, the word spa reflects that image. SPA stands for salus per aquam, meaning health through water in Latin. Thermae, which opened in 2006, has never deviated from the belief.

Even Jessica my therapist, who placed me in an almost trance-like state for 50 minutes as she stretched my body, told me the aquatic Shiatsu represents the type of massage that “those suffering from emotional distress” would find helpful to their wellbeing. On vacation, I had none of that. However, it put me in a mental state of bliss for the rest of the day and into the evening. The cost for a Watsu massage is 60 pounds and couples treatments are offered.

Is this how literary royalty like Jane Austen were inspired? The widespread belief is the resident and author of “Pride and Prejudice” bathed in these same waters with her brother. In the 18th century, soaking socially was all the rage for royalty and literary dignitaries in this city filled with culture. Elizabeth I gave the water rights to Bath, and the city has never looked back.

Across from the world heritage site that started it all – the Roman Baths, the Thermae Bath Spa attracts between 15 to 20 percent local residents. Of the 80 percent who are tourists, half consist of Brits on a day or weekend out. The largest portion of out-of-the-area visitors is Americans.

Guests receive a wristband to add on charges without having to return to the locker room for money. It also doubles as an electronic key for the locker.

Most guests stay for an average of two hours at a cost of 26 pounds – with many people electing to soak in the pools for the evening as reflected in the popularity of the Twilight Package. The three-hour spa session includes dinner at Thermae’s Springs Café. The restaurant urges diners to eat in their provided robes and slippers in order to return to the rooftop pool for the sunset. The experience costs 42 pounds.

“People come here to wind down instead of the pub. The atmosphere is quite a buzz,” Thermae spokeswoman Charlotte Hanna told Lake Tahoe News on a recent tour before we witnessed the behavior ourselves. “They’re doing something here that people have done for thousands of years, and we encourage that.”

Thermae, which is run privately but paid for with public dollars by a council reporting to the city of Bath, has undergone mass renovations. These upgrades include construction to burrow the pipes deeper to alleviate any health safety concerns, restoring the historic buildings and installing an ultraviolet filtration system. By minimally treating, and harnessing the water that comes out of the ground at 114.8 degrees Fahrenheit, the five-story complex can funnel and cool the water flowing into a variety of pools nearly 4½ feet deep to a temperature of 98 degrees.

Beyond the pools, the Thermae Bath Spa offers traditional spa treatments, body wraps, facials and the special Vichy rainforest shower as a cleansing therapy. For heat cleansing, there are a number of aromatic steam rooms in pods – with an overhead shower situated between them to cool off. (Trying each steam room will stimulate your senses.)

Although the majority of guests are adults, it’s easy to feel and act like a child floating around on a flotation noodle – especially in the Minerva Bath.

(An interesting observation: Spending hours in the pool did not wrinkle my hands). There must be something in the water.