BATH, England — You have to hand it to the Romans – they knew how to immerse themselves in decadence early on.

More than 2,000 years ago, they discovered England’s only natural hot springs west of London, dove into building a complex of bathing spots, as well as a temple to Sulis-Minerva and paved the way for three developers (Richard “Beau” Nash, Ralph Allen, John Wood) to build a chic, fun and historic city aptly known today as Bath. The mid-sized town may seem small, but is huge in culture, fashion and a celebratory blend of the old and modern-day British life.

It was the home of author Jane Austen, who has a center created on Gay Street as a tribute to her time there. It is still home to some of the oldest Georgian architectural buildings in Great Britain – including the Bath Abbey, a medieval church built in 1499. 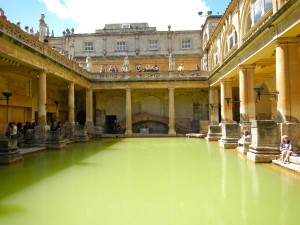 Roman Baths provide a look back at English history in the town of Bath. Photos/Kathryn Reed

But the absolute must for any Bath visitor would be a tour of the Roman Baths located at the popular Abbey Courtyard, where musicians entertain passersby at any given hour. Exploring the ruins can take a tourist back in time, which started about 10,000 years ago when the water draining down the hill was considered sacred by the Romans. From the terrace of the Roman Baths, one will notice the statues of historic dignitaries such as Julius Caesar, a Roman emperor who also holds the notoriety of invading Britain twice. This story is told through an informative audio tour and displays. One exhibit features coins – some representing a month’s salary for soldiers. Others date back to 133 BC.

The primary attraction to the Roman Baths is the historic main pool where upon closing one’s eyes a visitor can imagine them bathing there steps away from an ancient concrete atrium kept intact as a world heritage site.

Old architecture is very much celebrated here. This is demonstrated by the shape of the Circus, a circle of 33 houses inspired by the look of the Roman Colosseum; and the Royal Crescent, another complex towering over the royal park named after Princess Victoria.

History aside, the benefits to visiting Bath have stood the test of time. It is owned by the National Trust (which would be like the National Park System in the U.S.) and even private enterprise has contributed to its unique flair. Quarry owner and stamp inventor Ralph Allen built a Greek palace to ensure a superior view of the beautiful city.

Visitors seeking their own superior views are assured that on the Bath sightseeing double-decker bus tours. The 40-minute, hop on-and-off rides that start at the scenic Pulteney Bridge offer 38 stops with an audio tour and run about every 10 minutes in the summer. One tour stays in the city. The other crests the skyline.

Staying in Bath worth a weekend getaway or more

Bath is not one of those towns one would want to do in just an overnight stay. There’s so much to do in the city and beyond by train or car no time frame will seem adequate to cover it all.

After all, a visitor will want to spend an entire day at the Thermae Bath Spa, the royal bath built in 2006 at the Abbey Courtyard next to the Roman Baths historic site. Thermae uses the natural hot springs in its multi-pool, multi-facility complex for the modern-day visitor to enjoy and soak like the Romans.

Also relaxing, though in a much different way, is the Marlborough House. The bed and breakfast is an elegant and enchanting Victorian house known for its made-to-order vegetarian, organic breakfasts and inviting atmosphere. The rooms are exquisitely decorated with lacey curtains and provide nice touches including a heated bath floor, ample toiletries, a push-button shower and a tub that makes it clear these people know how to bathe. A hostess tray of snacks and refrigerator are on hand, along with a bottle of sherry for a nightcap to unwind from the day. Rooms range from 80 pounds for singles to 145 for families.

The staff is led by owner Peter Moore, who took over the inn the same year Thermae opened. He has much support from his workers Sarah and Lily, who go out of their way to ensure a place to enjoy before and after a day out taking in the sites and multitude of eateries. (Highly recommended: Sarah’s suggestion of the Lime Lounge for dinner with its discounts and outrageously tasty fish and chips is a must.)

When a guest wants to venture outside Bath, the award-winning Marlborough House presents an ideal launching pad to some of southern England’s most picturesque countryside. These include the roads to Stonehenge, the sacred, ancient rock site outside of Amesbury that is one of the most recognizable attractions in the world.

Shuttles to the world heritage site are offered through Bath’s local Scarper Tours starting at 9am. But for the ambitious who want to witness its spectacle at sunrise, a 10-minute walk from the Marlborough House is the town’s Hertz rental car station. Stonehenge isn’t open at sunrise, but the formation can be seen from the road. It is a memorable experience no matter the time of day.