The quonset hut Lakeside Theatre was about midway between today’s Applebee’s Restaurant and the Park Avenue stoplight in South Lake Tahoe.

So much snow in winter 1953 makes it hard to get to the theater.

Highway 50 then was only a narrow two-lane mountain road, thus more frontage area as seen in these pictures.

This building was demolished by 1963 and a beautiful new Lakeside Theatre (not quonset) opened near the Y in November 1963.

It was razed in about 2000 and the site now is CVS next to McDonald’s. 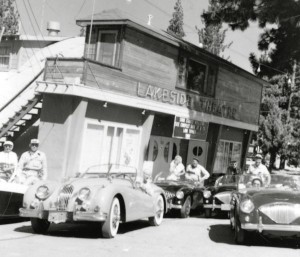 In 1956 it was "Diane" starring Lana Turner that brought movie-goers to the theater.

Previous post : Californis using special funds to pay for basics Next_post : Tea is more than a beverage to the British