Going 50 on 50 has been a mantra of locals for years. But what isn’t known is if the phrase or song came first.

Dave Hamilton says he’d like to think he coined the phrase, “but I imagine that term was around before the song.” This is in reference to the song and skit about driving 50 mph on Highway 50. 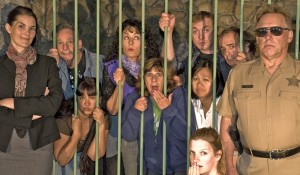 "Guilty Pleasures" is at the Boathouse Theatre for five shows starting Aug. 1. Photo/Provided

Hamilton with Mark D. Williams (who is the music instructor at Lake Tahoe Community College) are the creative geniuses behind “Guilty Pleasures” – the totally Tahoe play that returns to the stage for five performances starting tonight.

This is the sixth version of the play that was first written and produced in 2002. The last time it was updated was in 2009. Hamilton writes the dialogue and lyrics, while Williams is responsible for the music. Hamilton said the second half has changed so much through the years that it doesn’t resemble the first rendition.

“There will be three completely new numbers and many of the bits have been updated as well,” Hamilton said of the 2012 show.

Songs include “Keep Tahoe Blues,” “Living on Tahoe Time” and the “TRPA”.

The play is about a progressive judge who allows several individuals to perform a show as part of their community service.

Hamilton and Williams came up with the idea for “Guilty Pleasures” after working on stage productions together and thinking they could do better than some of the material they had been working with.

“We had done two shows at the Boathouse — ‘Nunsense’ and ‘6 Women with Brain Death or Inquiring Minds Want to Know’. Both are comic skit musicals and in the pantheon of shows, not very well written. However, both have been wildly successful. People like goofy shows,” Hamilton told Lake Tahoe News as to how the idea for “Guilty Pleasures” came to life. “We figured we could write something that bad and not have to pay to do it. I was trying to think of an overarching idea to capture some of the song ideas I had come up with. Somehow I came up with the idea that these people, normal folks, were all doing the show as part of a community service project.”

Most of the shows in the past decade have sold out. This is attributed to locals, second homeowners and regular visitors being able to relate to the themes delivered in “Guilty Pleasures”.

Returning to the Boathouse Theatre are Kurt Munger, Chris and Pam Taylor. The three have been in each of the six shows. Stephanie Grigsby, Anita Jones, Mark Williams (not the music guy) and Matt Ault will be playing different parts than they have in the past. “Guilty Pleasures” newbies are Carrie Bauwens, Joanie San Agustin and April Foiles.

Whether there will be a future update Hamilton won’t commit to saying at this time.

“After six versions, it gets harder to find material that everyone will get. There is always something topical going on, but in general it gets more difficult,” Hamilton told Lake Tahoe News. “It is interesting because about when I think people are tired of it, I keep running into local people who have never seen it. We did feel that when we ran it three years in a row, that it lost some steam. But then look at ‘Beach Blanket Babylon’.”

•Location: The Boathouse Theatre is at the Tallac Historic Site, which is located two miles past the intersection of highways 50 and 89, just past Camp Richardson, on the lake side of Highway 89.