TRUCKEE – “Don’t be nervous. If anything, you should feel more secure with all the gear. You can roll down the mountain with all this gear and you won’t get hurt.”

Then David Fox asked me to sign a liability waiver. The irony would have been amusing if it weren’t me and Sue in the get-up that had us resembling the gnarly biker chicks we don’t even aspire to be.

Wearing what looks like flak jackets, except for the fact the arms – especially the elbows – are super padded, we then put on the kneepads. But they also protect the shins, so we look like we could be doing battle. We are just hoping it’s not a fight with terra firma, because we’re afraid she may win. 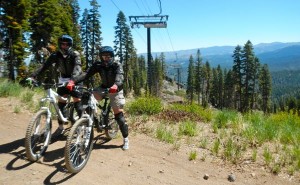 Our cycling helmets won’t do. Nope. Here at Northstar it’s the full headgear that covers our face and chin.

Not even our gloves are acceptable. No fingertips are showing once we are fully outfitted.

Sue looks at me in bewilderment or maybe it was disgust. This was my idea and she came along reluctantly. Before we arrived at the resort I had joked it wouldn’t be so bad; it’s not like we’d be wearing all those pads the expert riders wear.

Next time I’ll do more research about the activity before opening my mouth.

I say all this because it was getting the gear on that was the most nerve wracking part of the adventure. Riding under the direction of Luke Sheppard, while not always easy or comfortable (which had nothing to do with him), was an experience I would highly recommend. He is the manager of the 4-year-old bike academy at Northstar.

Northstar knows what it is doing. Not everyone wants a paved bike path. And not everyone is willing to go it alone at a bike park.

After all, a recent report from the Outdoor Industry Association says Americans spend almost $650 billion on outdoor recreation each year. The bulk of those billions is spent on guides, hotels and restaurants. Less than 20 percent is spent on goods like backpacks and bikes. The same study revealed that between 2006 and 2011, the outdoor recreation industry grew by an average of 6 percent a year.

Northstar’s bike academy has been growing as well – a testament that those who like to play outdoors will do so even in a recession.

This Truckee-area resort has a variety of classes available for anyone who can operate a bike with hand brakes.

We take the gondola out of the village to mid-mountain. Every third car is a bike rack. We walk past the lodge to the mountain bike center to get fitted for our bikes. Giant sponsors this park; so all the bikes are that brand.

With hydraulic brakes, Sheppard says to use one finger to operate them. This also allows for a better grip while riding.

We then take the Zephyr chairlift up. (Vista is open to cyclists on weekends.)

Live Wire – a trail with 50 jumps on it – is being irrigated to keep the dust down.

“It’s very similar to a BMX track,” Sheppard says as we pass above some of the trail.

We spend our morning on TryUmph. It starts out like a fire road, so I’m thinking this will be easy. But Sheppard wants us to stand. This is completely foreign to us. Stand tall – not just our butts off the seat. This is so the bike is absorbing the terrain and not our bodies.

We are supposed to trust our bikes.

Riding over the rocks that are clearly embedded in the ground gets us used to the bounce. We dodge the loose rocks.

Stopping to the side Sheppard is almost giddy talking about the tread on the tires. It’s important stuff – especially when it’s time to brake or turn.

We practice turns on a straightaway to get the feel for leaning the bike into the turn while keeping our bodies upright. This helps keep the tread on the dirt so the tires don’t slide and the rider doesn’t tumble. Something feels weird. Sheppard says it’s because I’m leaning and the bike is straight.

Here comes a real turn. I want to lean into it, but only the bike is supposed to be tilted. I’m thinking too much. I’m going so slow I should be able to do this. Making the turn was no big deal, but I’m sure a video replay would show it was not executed well.

We get onto the Easy Rider trail beyond the mid-mountain lodge. This is where we put our skills to the test. While not a true single track, the route is much narrower. Rollers are fun, reminding us of a trail near Lake Tahoe Airport. Sharper corners don’t allow time for thinking – lean, stand – and breathe. Platforms are on the trail to get us used to the transition from dirt to manmade structures – just in case one day we are out doing jumps.

If we ever take the Bumps and Bends class, we would be taught how to corner faster, jump and ride rocky terrain.

While more lifts are not likely to open to cyclists, resort officials are talking about expanding the trail system. There are more than 30 trails now.

• The website has prices, hours and full explanation of what the bike park offers.

• Helmets are required for all riders.

If competition is what you want, Northstar has it: