TRUCKEE – After logging almost three years on the slopes of Northstar, the Ritz-Carlton, Lake Tahoe has shown how easy it is to mix business with pleasure.

That’s because some may say the only AAA five-diamond hotel in the Tahoe region has been good for guests, village retailers and even Placer County by contributing to local government coffers.

Per Placer County records, transient occupancy tax collected from the Ritz guests and about 500 other condo and single-family units in and around Northstar and Martis Valley (situated east of the mountain) almost tripled to $1.1 million from the quarter ending in December 2009 to the next that wrapped up March 31. 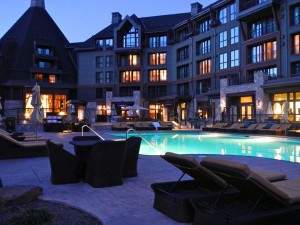 Of course, the winter season is always strongest. But more telling, tax revenue collected in that same quarter in 2011 at the height of the ski season went up yet again by almost $150,000. Granted, the ski resort had much help from Mother Nature, who provided a banner winter. Still, this is all despite a pesky recession that officially started two years before the resort opened in December 2009.

Sales tax figures almost doubled to $98,989 in the first quarter since the Ritz-Carlton came onto the Sierra Nevada scene. (This statistic also includes the primary retail sales hub of the Northstar Village.)

“(The hotel) has definitely had an impact on our business,” said Kelsey Tedrini, manager of Helly Hansen.

Tedrini said her Northstar Village store fields calls from the Ritz-Carlton concierge staff helping guests get “last minute things” like a pair of socks. In one instance, a staffer retrieved the item for the guest.

“It’s a snowball effect. At least it gets people in the store,” she said. “Of course, last year was a little slower, but I think it’s been best for business. It’s the Ritz Carlton. It’s totally professional.”

A hospitality business must use all its resources and advantages to get its share of the tourism dollar, which has seen more and more competition around the world (even with brands like the Ritz-Carlton recently expanding to opening its first hotel in Austria).

Income levels of the wealthy have gone up, making travel attainable. But a recession can make all markets more frugal.

With North Lake Tahoe occupancy rate percentages averaging in the mid-40s in 2012, according to Mountain Travel Research, some hoteliers have found it necessary to lower daily rates despite a decade of growth year after year. The average between 2011 and 2012 for the period ending in July went down 1.5 percent to $209 in North Lake Tahoe. By comparison, Ritz-Carlton rooms start at $239 per night for advance purchases on an October weekend and climb to $4,500 for the Sugar Pine Suite.

Hotels that offer more amenities and host or participate in more regional events that appeal to markets ranging from the recreational warrior to the supreme foodie will come out on top in the long haul.

“Certainly, over the last few years, all segments (of our business) have been impacted (with the recession), but we continue to be optimistic that we’ve turned the corner and travel has turned the corner,” Ritz-Carlton, Lake Tahoe Market Director Steven Holt told Lake Tahoe News on a recent meeting in the Ritz Destination Club lounge during the Lake Tahoe Autumn Food and Wine Festival.

Holt, who oversees the public relations for all Northern California properties of the global company, added Lake Tahoe’s efforts remain in making the resort more four-season by “connecting the lake” to the mountain between the hotel concierge staff and managers of activity and recreation outlets.

For example, guests lounging in any of the Ritz-Carlton’s plentiful seating areas in and out of the hotel are likely to catch hikers taking a jaunt across the mountain (some with their dogs because the hotel is pet friendly), or are alongside gnarly mountain bikers screaming straight down the slopes. Swimmers may take laps in one of the hotel’s three pools on the massive, split-level patio. Gym rats can enjoy a view of all this on one of the numerous exercise machines.

Windows are big on Tahoe’s Ritz-Carlton property – with 170 hotel rooms, 23 private residences and 25 Destination Club lodging facilities. The warm sun provides enough heat to three-quarters of the building, making it energy efficient enough to qualify as a first-level LEED-certified benefit. The $300 million resort hotel earned the prestigious distinction from the U.S. Green Business Council a year after it opened by recycling more than 16,000 tons of construction waste, installing treatment basins to capture stormwater runoff, putting in bicycle racks and lockers for employees and using the massive onsite boulders in its retaining wall that climbs up the mountain next to the new road. That effort – along with about two dozen others such as the mere building of a special gondola – showed the difficulty and resulting success of the project that took three years to build.

“It took a year and a half just to build the road,” Holt recalled.

But no one said living and staying in Tahoe is easy. The destination has its own distinct charm and character, as Holt pointed out in comparing the style to the Ritz hotel at Bachelor Gulch at Beaver Creek ski resort in Avon, Colo.

“We want to see the experience (of the hotel) be specific to the place. Here, California has its own style,” Holt said, as a few Club guests sauntered in and out of the special, fifth-floor room in their shorts and T-shirts for the breakfast buffet. Cookies were neatly stacked in drawers to munch on later in the day.

Guests of the Ritz-Carlton should not go hungry with the hotel’s eatery options and planned events. There’s even a rooftop garden created by Guest Relations Manager Mitch Penning, who plants a plethora of various vegetables including six types of lettuce and edible flowers that may be found all over the property, right down to floating in a cocktail glass.

Nine specialty events in September were scheduled. They range in taste from Pints and Pies at the Manzanita fine-dining restaurant where James Beard Award-winning chef Traci Des Jardins provides her magic touch. “Beer and a Burger” is offered at the casual MountainBlue café. Master cooking classes are slated there on the weekends. “The Art of the Cocktail” educates the amateur libation maker in the Living Room. This dining offering is just like that – where falling asleep in one of cushy chairs or chaise lounges at the pool would be understandable in a land that brings new meaning to relaxing and rejuvenating.

(Note: From the Living Room menu, ordering the roasted vegetable wrap at the pool hits the spot.)

If you’re into s’mores for dessert, there’s a fire pit calling your name on the expansive patio area.

“This is awesome,” said one woman as she discovered the lower-level hot tub and fire pit. The small hidden cove is inviting enough after soaking in the tub to lounge in a robe and sandals in front of the fire while listening to the slopeside night sounds.

If that type of lounging isn’t enough for utter relaxation, a 17,000-square-foot spa serves up a full page of treatments and services – including an herbal milk bath and massage running $185 for 50 minutes. Every little whim of the guest is considered.

A testament to finishing touches at the luxury resort, even the artwork in the rooms and in the common areas adds to the experience of the place. For instance, a trio of paintings featuring pup tents in one of the hallways makes one feel at home in the Sierra Nevada.

Albeit modern, the rooms offer a mountain motif décor, with a full set of bathroom and hall closet supplies to answer the occasional whims of the guests. (Note: One thing missing – an electrical outlet at the desk.)

Around the property, water dispensers keep guests hydrated during warm days – especially for the multitude of guests who come up from the flatlands of Sacramento and the San Francisco Bay Area and need to acclimate.

Then, there’s the staff – who make courteous customer service such a mantra that one forgets being in the Lake Tahoe region. It must be due to how the hotel chain starts its days. Holt claims that the 45,000-plus people who work for the chain share in a half-hour session designed to point out “service stories” highlighting where staff members went out of their way to help a guest.

“The high quality and elevated level of service the Ritz-Carlton is known for delivering to its guests makes it a good match for Northstar,” said Jessica VanPernis, spokeswoman for Northstar. She mentioned that since Vail bought the ski resort two years ago the hotelier makes a good fit for the ski resort giant.

Northstar has long evolved into a destination village with various lodging options most notably through East West Partners condo projects. They include: the Northstar Lodge – a Hyatt timeshare; Tahoe Mountain Resorts and One Village Place – both ownership properties that may go into a rental pool.

The hotel provides an elegant, non-ownership place for guests to take part in the Tahoe, California lifestyle.

Directions: From South Lake Tahoe, take Highway 50 east. Take Highway 28 at the top of Spooner Summit. Turn right onto Highway 267 in Kings Beach. Turn left onto Highlands View Road. (This is the street before the main entrance for Northstar.) Wind around until you see the hotel on your left.

Previous post : ‘Peace One Day’ to be shown at Unity at the Lake Next_post : Where is your favorite place for fall colors?