Ball fields group sitting on half a million bucks

Cyclists in South Lake Tahoe will soon have a less bumpy ride across two bridges.

The old Douglas fir planks on the structures spanning Trout Creek and Upper Truckee River will be replaced with a material similar to what is on the 15th Street Bridge. Even road bike riders should be able to use them. 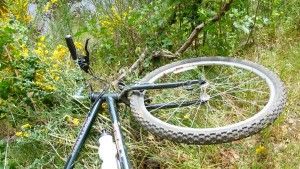 Bike trails in South Lake Tahoe will be upgraded this year. Photo/LTN file

The allocation of $30,000 to get this work done was granted July 27 by the South Lake Tahoe Recreation Facilities Joint Powers Authority board. It’s anticipated the city’s public works crew can do the job this building season.

Friday morning’s three-hour meeting at Lake Tahoe Airport was the JPA’s annual meeting. An unexpected expense for the JPA board was the need to pay El Dorado County $44,000 for the assessor’s office to notify property owners of the annual assessment. When this was first done in 1991, it cost $11,000. El Dorado County Supervisor Norma Santiago, who also chairs the JPA board, is going to research why the fee has quadrupled and see if it can be lowered.

With the passage of Measure R, which altered the original language of Measure S to allow for more flexibility in spending recreation dollars, the JPA will now meet twice a year. The next meeting will be in January, though no specific date was agreed to.

The bike improvement money comes from Measure R and would not have been allowed under Measure S. One of the significant changes in the measures was to allow for current trails to receive maintenance funds.

The other thing the bike committee recommended and the board agreed to is to put $100,000 as matching dollars for a $600,000-plus grant that would go toward cycling on the South Shore.

If the grant were not secured, it would have to be decided if the $100,000 goes into trails or is again used as a tool to go after more money. Notification should come in October if South Tahoe is awarded the grant.

The other component to Measure R is that the ball fields – baseball, softball, soccer – have $500,000 now to spend. But the committee tasked with making recommendation to the board had nothing definitive to recommend. This, despite the members having met for half a year.

Sue Novasel, who is on the Lake Tahoe Unified School District board, made a pitch for the high school softball field to get $45,000. (She is not on the ball field committee.) That field has taken up an inordinate amount of the committee’s time. Issues with state and federal laws involving equality of boys and girls’ facilities is at stake.

South Lake Tahoe City Councilman Hal Cole, who is on the JPA board, said to Lake Tahoe News after the meeting, “Are we going to do the high school field which is not part of the JPA?”

He said if the JPA puts money into that field, then the JPA will have further responsibilities for that field down the road.

“We need to fund the biggest priority and go from there,” Cole said. He doesn’t want to do a bunch of insignificant improvements.

John Upton, the lone paid staff member of the JPA, said it’s possible if the fields committee comes up with a true recommendation for the board, that a special meeting could be called.

“I think everyone supports a third field at the Al Tahoe site. I feel it will be a field for baseball and softball. The committee needs to decide that,” Upton said after the meeting.

Steve Knoll and Chuck Leonard, field committee members, gave a presentation to the board about the state of fields on the California side of the South Shore. (The recreation measure’s boundaries are essentially the same as Lake Tahoe Unified.)

The field and bike committees plan to keep meeting and figuring what is best for Tahoe.

As was pointed out by some at the meeting, the cycling community had an edge because a master plan through the Tahoe Regional Planning Agency exists. No master plan is in place for the fields. The committee could as the board to fund a master plan, but what was proposed to voters was the taxpayer money would be used on actual field upgrades, not a planning document.