By Susan Wood and Kathryn Reed

The gunman in a massive fatal shooting at IHOP in Carson City Tuesday morning who injured seven people and killed five including himself gave no indication to his South Lake Tahoe customers and neighbors of the Mi Pueblo market that he was unstable.

The mood was solemn and one of disbelief Tuesday night as those who knew Eduardo Sencion, 32, of Carson City reflected on the tragic news.

“This is so devastating,” said Robin Carlson, who lives behind the store off Pioneer Trail. “This came out of nowhere.” 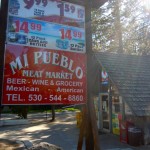 Customers of Eduardo Sencion's at Mi Pueblo are in shock. Photo/LTN

Carlson insisted she had seen no change in Sencion’s demeanor lately. Carlson and neighbor Patrick Lauzon had just seen Sencion, and they described him as being “himself.” Business has been steady at the store, but nothing would indicate that things were so bad he was about to snap.

She added that Sencion said business went well over the Labor Day weekend.

“He said it was great,” Carlson said. “And this store is vital to this community.”

A sign on the front door read: “Sorry we are going to be close for today.”

Carlson even recalled how Sencion would cover her purchases on occasion.

Monica Morales, who lives around the corner from the small store, grew up with the store over the last dozen years.

“Is this crazy, no?” she said, standing beside her children outside the storefront. “We just saw him (Monday). When I heard this happened, my stomach was sick,” she added, while rubbing her stomach.

The scene around the store Tuesday night was quiet, albeit a bit eerie as if something wasn’t right with the store being closed and word catching on that such a tragic shooting could have originated with such a fixture of the local community.

Sencion has had mental issues since at least April 2000. That is when South Lake Tahoe police officers assisted with getting him committed to receive psychiatric care.

South Tahoe Police Chief Brian Uhler told Lake Tahoe News the police report is being given to Carson City officers to assist them with their investigation into the Sept. 6 shooting spree at the IHOP in Nevada’s state capital. Uhler would not release it to the media.

Sencion with his two brothers own Mi Pueblo market in South Lake Tahoe on Pioneer Trail and one in Stead.

According to the Reno Gazette-Journal, Sencion’s brother, Gilberto Sencion Gonzalez, 46, said he arrived in South Lake Tahoe from Sacramento Tuesday afternoon to find the market closed.

Sencion walked to the back of the IHOP with an AK-47 and then began shooting, according to officials. Carson City Sheriff Kenny Furlong said at a 5pm press conference there is no apparent motive as to why the 32-year-old unloaded his weapon. He has no military background, though two who died were in the National Guard.

Two other guns were found in Sencion’s vehicle.

While South Tahoe was quiet Tuesday, quite the opposite could be said for the scene in Carson City, where the morning started out with traffic stopped on Highway 395 on the south side of town and helicopters and ground ambulances evacuating the injured. The afternoon gave way to a massive display of news teams at a police command post behind the IHOP and the Wells Fargo Bank. 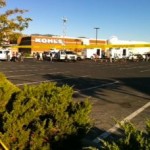 Nearby businesses were closed and the entire parking lot in front of Kohl’s was cordoned off as a crime scene. The shooting became the talk of the town, with state offices closing and nearby businesses taking a page from their own makeshift emergency manual.

Raley’s in Carson went on lockdown when an employee saw the gunman in the parking lot on a rampage. Shoppers were walking by looking bewildered while others stood with their hands over their mouths dazed in disbelief that such a huge crime could happen so close to home.

A bouquet of flowers was placed at the crime tape as a gesture of sympathy to the crime victims.

Western Nevada College in Carson City was spearheading a candlelight vigil starting at 8:30pm Tuesday at the capitol complex, at the statue of the fallen soldier.