Publisher’s note: This is the second of three stories about the Park family and Edgewood Companies’ evolution at Lake Tahoe.

The Park family began to rent what Brooks Park called “parking lot land” to the likes of Harvey Gross and Bill Harrah in the 1950s. His parents still lived at Friday’s Station then, where his dad handled these transactions.

He recalls Gross as a down-to-earth man with a good sense of humor and Harrah as a man of his word. “I admired him for his ability and for his integrity.”

“When we built the golf course in 1965, we stopped herding, but we didn’t stop completely. Up until a couple of years ago (prior to 1992), we still took cows there for sentimental reasons,” Brooks said.

Brooks was proud of the golf course, but interestingly enough, it may not have been built without gentle prodding from a man who knew about such things.

“Del Webb was a friend and he said what we need is a golf course. We built it in 1966 and it opened in 1968. We spend lots of money on that golf course; we like it,” Brooks said.

As an aside, Brooks said he and Webb decided if they ever wanted to build something else, the golf course could always be torn up. He added, “Now we wouldn’t change it; we wouldn’t want to change it.” 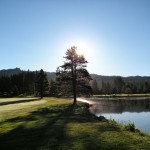 In 1965, Brooks said no permits were required, but “the area was brushy and unclean. We thought the least we could do was clean it up!”

In the late 1960s when the George Fazio-designed golf course opened it was among the top 100 courses in the world, according to Golf Digest. Today, it still ranks as one of America’s top courses.

In the 1970s, the Brooks Park family was again on the move, this time with the opening of the trouble-fraught Park Tahoe Hotel Casino, now MontBleu Resort Casino & Spa.

“We thought the higher and better use of the land would be a casino and restaurant. It took a long time to be built because of the injunctions by the League to Save Lake Tahoe,” Brooks said.

That delay turned out to be three or four years, Brooks said.

“The steel was sitting there, it was very costly. If we didn’t have the perseverance, it wouldn’t be there now,” he added.

A check of the records shows the Park Tahoe was dogged by complaints and charges and didn’t open its doors until 1978. Flash forward to 1992, when it appears that it was becoming even more difficult to jump through the various hoops required to get a construction project off the ground. 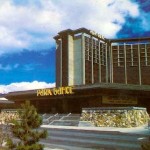 Park Tahoe Hotel was run by the family. Now Tropicana runs what is called MontBleu.

“We’ve applied for permits to build a new development on the lake shore,” Brooks said. “We’re still interested in improving and developing the property south of Edgewood. We’re not interested in destroying property. It’s hard to get approval. I like to get things done, but you have to have a lot of patience up here today (1992).

“I don’t know how many different people I have to ask to get something done. In the ’50s and ’60s, Gross and Harrah said yes or no.”

When I asked Brooks in 1992 what he does now, his answer was as simple as his home in Gardnerville. “I take care of business,” he said, referring to Park Cattle Company holdings, now Edgewood Companies.

Back then he handled Edgewood Water Company, which did and still does supply water to the casinos at Stateline and Edgewood Golf Course.

He also managed the acreage upon which the Stateline casinos sit, land still owned by Edgewood Companies. Besides that there were cows to be tended at Topaz in California and in the Carson Valley, although it’s a safe bet Brooks had some hired help to assist him with these chores.

Today, much of the land Brooks purchased at Topaz Lake is in the hands of his son, Bruce, and grandson, David. Land holdings have grown and total at least 10,000 acres, according to David and Bruce.

Brooks’ grandson, David, said the business model has definitely changed. Now, the family is no longer involved in day-to-day operations, but three family members including David, sit on the board of Edgewood Companies.

In a recent telephone interview, David said times are changing and the economy is suffering.

“Hopefully, the TRPA and other environmental groups will loosen up a bit and give us a break. Look at the downtown core; it’s pathetic,” he said. “Not just for us, but for everybody. We all have to turn over a new leaf. I don’t speak for the company; I speak for myself.

“My grandfather was a mastermind to put all that together at Lake Tahoe. If he were still here, it would probably still be a family-run business,” David Park said.