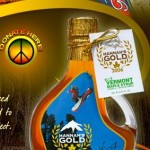 Publisher’s note: This first appeared in the December 2006 issue of the Tahoe Mountain News and is reprinted with permission. Hannah Teter hopes to repeat her 2006 performance in Vancouver next month.

Kobe beef, Mouton Rothschild Cabernet, Swiss chocolate — certain foods and beverages stand above the rest. For those who know syrup, nothing but the liquid gold from Vermont can cover a pancake, waffle or French toast.

Hannah Teter, 2006 Olympic snowboarding halfpipe gold medalist for Sierra-at-Tahoe, knows her syrup. The native Vermonter has been devouring the sticky stuff all of her 19 years.

“I grew-up eating pancakes and French toast. It was my daily breakfast,” she said late one morning as she waited for a film crew to arrive at the Meyers home she shares with her brother, Elijah. Another brother, Abe, lives across the meadow. She is the youngest of five kids. “My Dad has made syrup since I was little. Me and my brothers went out and would help him.

“With Vermont syrup, it has this sweet flavor. Once it hits your lips it’s sensational. It’s a sweet natural-like blessing from the Earth,” she said.

Breakfast isn’t the only time for syrup.

“After we were done making maple syrup when I was younger, we would get a bowl and pack snow in the bowl and pour freshly made syrup in it,” Teter said. “It would be a treat.”

Her Dad still bottles syrup for family and friends. Those same maple trees he taps into are being used by a company which is mass producing Hannah’s Gold. Since coming up with the creation, Teter has raised about $4,000 for World Vision, which helps underprivileged children in Africa.

“I wanted to do something special. In my heart, since I was younger, I felt an urge to give back and reach back out,”Teter said.

One hundred percent of the proceeds from the bottles that are available online at www.hannahsgold.com and at Sierra-at-Tahoe go to the charity. Sierra is even serving Hannah’s Gold for breakfast in mini packets.

Mix above with dry ingredients and let set for 30 minutes. Make into pancakes or waffles. Serve with plenty of real Vermont maple syrup.

“This mix will keep in the fridge most of the week, but works best the first few days,” said Pat Teter, Hannah’s mom and the woman who provided the recipe.