Red dots fill a map; with most being located in Christmas Valley and near the state line. They represent the more than 600 private wells within South Tahoe Public Utility District’s boundaries.

Most are at residences, while others are at campgrounds, a school, trailer parks and other commercial entities.

Per state requirements South Tahoe PUD is trying to get a firm understanding on how many are operational, exact locations and if people have any issues.

Ivo Bergsohn, a hydrogeologist with the district, is tasked with overseeing all of this. A survey with 19 questions is being sent out to the well owners this month to gather some basic data, see if they have questions, and let them know the district can help where appropriate.

“The information we gather will be used to help guide the groundwater management plan,” Bergsohn told Lake Tahoe News. 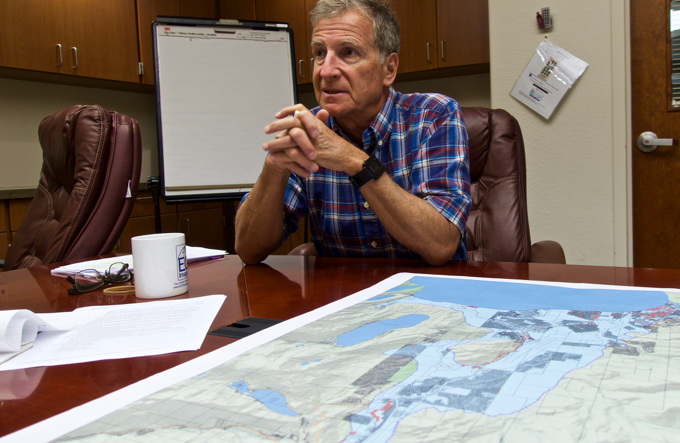 During the drought California thought it would be a good idea to start regulating groundwater. It was one of the last states to do so. With laws that were passed in 2014, different jurisdictions had to create groundwater management plans. STPUD is in charge of that mandate for much of the basin on the South Shore, though El Dorado County has oversight in some areas.

Groundwater management pertains to the water level, storage, quality, land capability, and ensuring there are no adverse effects to surface water from pumping.

In 2016, per state mandate the district performed a stress test to determine how much water it had. At that time – which was before last year’s record snowfall and at the height of the drought – there was enough water in the aquifer for 31 years.

The district is not looking for new customers or even to tell people how to use their well or regulate the use in any way.

What employees can do is provide tips about maintenance, share how to properly disinfect a well and other related information.

“If we have a properly managed well, there is potentially one less conduit of contaminate into the aquifer,” Bergsohn said.

People keep their wells for various reasons – for historical purposes, not wanting to pay a water bill, not wanting anything added to their water, and staying off the grid, so to speak.

STPUD was well ahead of the state in monitoring groundwater issues. It has been doing so since about 2000, three years after the gasoline additive MTBE (methyl tertiary butyl ether) was found in wells. The district won a multi-million-dollar lawsuit against several gas companies as a result of that contamination.

Contamination, though, remains the No. 1 threat to the district’s water supply, according to Bergsohn. PCE (tetrachloroethylene) is an issue today with wells in the Tahoe Keys and Lukins Brothers water districts being contaminated. STPUD is providing those two entities with water.

Arsenic is a naturally occurring contaminate, for which public districts regularly test.