Say goodbye to the Horizon.

While it isn’t going to be bulldozed, it is going to be gutted after the lease with LV Casino LLC expires March 31.

Taking over operations is Warner Hospitality Group out of Las Vegas. The company is under contract with the owners to remodel the dilapidated Stateline casino. It will be a multi-phase project, with the first phase slated to open in June.

The Park family has forever been the property owners. Family members were having disagreements on how to manage the business that includes cattle in the Carson Valley, the Horizon and MontBleu casinos, Edgewood Tahoe Golf Course and the future Edgewood Lodge so they opted last year to divide holdings among family members. 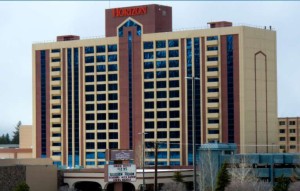 Called “The Ho” by locals, the Horizon hotel-casino is about to undergo a remodel. Photo/LTN

Jon and David Park now own the Horizon and the cattle company. Neither is returning phone calls.

Horizon Stadium Theaters operators have been told they will be out of business at the end of the month. Reservations for the hotel are not being accepted beyond the night of March 30.

“We are in the dark,” a reservation specialist said of his future and the property’s after this month.

Warner Gaming officials declined to say anything other than a plan is being worked on.

A person close to the changes, but who could not speak on the record, told Lake Tahoe News, “They’re looking to do some Hard Rock-related stuff with the Horizon, but some licensing stuff has to be worked out, including what to do with the corporate owned Hard Rock in Harveys.”

Warner runs the Hard Rock hotel-casino in Las Vegas and is developing one in Sioux City, Iowa, among its other properties.

The Hard Rock inside Harveys is a concessionaire for the casino company. This means Caesars Entertainment, parent company of Harveys, does not have a say if a Hard Rock-themed hotel goes in next door. Nor have Harveys officials been approached about what Horizon plans to become.

The local Hard Rock, which has a restaurant and retail outlet, deferred comment to corporate PR, which deferred to Brookfield Real Estate Management Partners in New York. Multiple calls were not returned.

Nichols Engineering and Environmental Services in Stateline is working on the remodel, but would not comment about specifics.

“Both the county and TRPA will sign off on the permits. TRPA will authorize the changes under their conditional permit, and building department will authorize any construction required of building and fire codes – e.g., electrical, mechanical, plumbing, structural, etc,” Mimi Moss, Douglas County community development director, told Lake Tahoe News.

Jeff Cowen, with the Tahoe Regional Planning Agency, told Lake Tahoe News, “They are looking to do improvements at the property that are consistent with the South Shore Vision Plan.” He said no application for a permit has been submitted.

The 539-room hotel has been on the decline for years. The gaming floor only has slot machines. The place is often like a ghost town.

The building opened in 1965 as Del Webb’s Sahara-Tahoe. In its heyday Elvis Presley, Phyllis Diller and the Osmond Brothers would play there. It was like having a Las Vegas style hotel-casino in Lake Tahoe.

In 1983, it was renamed Del Webb’s High Sierra. At that time it had a western theme.