Descendants of the Park family are dividing their thousands of acres at Lake Tahoe and in the Carson Valley, including buildings and business operations, among family members. The property has been in the family since the late 1800s.

“We had a differences with the business philosophy of the company. This split allows us to move forward with ideas that are aligned with our long-term goals,” Jon Park told Lake Tahoe News.

Once known as Park Cattle Company based in Minden, the company this century evolved into Edgewood Companies. 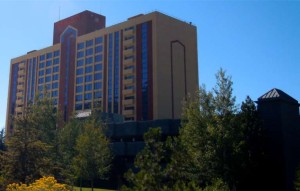 Expect changes at the Horizon hotel-casino in Stateline after the lease expires March 31, 2014. Photo/LTN file

The Blach, Seeliger, Lourdeaux and Kelly families will continue to operate Edgewood Companies. The Park family will establish a yet to be named company.

“Everything on our end stays the same minus the assets, and they won’t be on the board when the deal is finalized,” Bryan Davis, spokesman for Edgewood told Lake Tahoe News.

The changes do not impact the plan to develop Edgewood Lodge at the golf course.

The new company will own the 539-room Horizon casino at Stateline and the 4,000 acres in Carson Valley, including all of the ranching operations.

The change in ownership is expected to be completed in January or February. The Nevada Gaming Control Board needs to approve the changes involving the casino ownership.

LV Casino LLC, which operates the Horizon, has a valid lease and gaming license until March 31.

Park said, “A big step going forward is improving the operations at the Horizon property. We are hands-on owners and we will definitely be involved in the business at the lake and in Carson Valley on a daily basis.”

He would not get into what the plans are for the rundown casino when the family takes over the operations.

The Horizon has fallen on hard times that go beyond gaming declining at Lake Tahoe. Table games are no longer offered and big-name performers are no longer booked there.

When the property opened in 1965 it was called Del Webb’s Sahara Tahoe, and Elvis Presley played there.

Park isn’t worried about the decline of gaming, saying Lake Tahoe is still a draw from gamblers.

MontBleu, which is across the street from the Horizon, is an Edgewood Companies property. The lease with Tropicana Entertainment out of Las Vegas expires in 2028.

Lake Tahoe News in June 2011 did a three-part series on the Park family. Here are links to part one, part two and part three.