El Dorado County supervisors are proceeding with buying the land for a courthouse in Placerville even though it is mired in controversy.

On today’s meeting agenda is a closed session item to discuss allowing the county to go forward with negotiating buying property owned by John Briggs. He is the father of Supervisor Ron Briggs, grandfather of Placerville Planning Commissioner Brian Briggs and father-in-law of Superior Court Judge Steve Bailey. John Briggs is also the former state senator who is famous for the 1978 proposition called the Briggs Initiative that had it passed, would have meant all employees in California’s education system who are gay or lesbian and their supporters would have been fired.

While the courthouse project has been in the planning phase since 2008, earlier this fall an anonymous letter was sent to the Judicial Council of California outlining a tangled web of conflicts of interest that would financially benefit the Briggs family.

The county needs to buy some of the land owned by the Briggs Family Trust, which is controlled by John Briggs. Ron Briggs owns two nearby parcels.

Ron Briggs did not return a phone call. 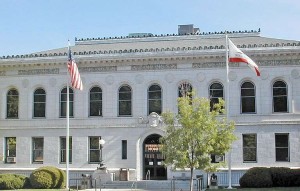 This is the courthouse in Placerville that would be replaced.

Curt Child, chief operating officer of the Judicial Council, told Lake Tahoe News his office sent the county a series of questions and is in the process of reviewing the responses. A decision whether the parcel in question is deemed a controversial site is expected by the end of the month. Steven Jahr, administrative director of the courts, will make that determination.

If it’s deemed controversial, then the entire Judicial Council will review the matter. If Jahr says there is no controversy, the process moves forward.

“Courthouses are important to communities. Often there is some difference of views of where it should be located,” Child said. “The anonymous letter raised some other issues beyond location.”

The letter says, “Ron Briggs and his son purchased several nearby parcels of land adjacent to and abutting the 26.5 acre courthouse site that are also benefiting from all of these government funded improvements, in essence, they are land speculating with a guaranteed outcome paid for by the taxpayers.”

Briggs, during his tenure on the board since 2007, has recused himself anytime courthouse matters have been before the board. However, the anonymous group contends Briggs “has been quite busy behind the scenes making things happen for this project. He often shows up at redevelopment meetings and other meetings pushing the project.”

John and Ron Briggs signed legal documents for the Judicial Council stating in essence they have done nothing unethical.

El Dorado County Counsel Ed Knapp responded to Judicial Council, saying, “The county is aware of no conflicts that should impair the ability of the county, city of Placerville, and the state to move forward with the construction of this much needed courthouse. Nor is the county aware of any legitimate reason this should be considered a controversial site.”

The anonymous group says twice it has asked the grand jury to investigate whether improprieties have occurred and each time the jury was prevented from doing so. The 2012-13 grand jury was disbanded midterm. Bailey was the presiding judge of the grand jury at the time.

The group said in its letter, “As concerned citizens and taxpayers for honest, open and transparent government, and in light of the current state budget problems, we request that the state Office of the Courts not fund this site acquisition or any further construction costs until the matter has been fully investigated to be assured there is not illegal activity, misuse of government funds, profiteering, favoritism or impropriety and that taxpayers, the state and federal government are not paying for the private real estate development interest of the Briggs family.”

The new facility would replace the two Placerville buildings now being used by the court. One is the courthouse built in 1913 on Main Street. The court also uses a portion of a building in the county government center. Neither building has adequate security nor do they meet current regulations such as seismic and Americans with Disabilities Act rules.

The Main Street courthouse is the oldest of the five court facilities in the county.

If all goes forward, the building could be completed in the third quarter of 2018. The 87,642-square-foot facility would contain six courtrooms – the same number Placerville now has. The new building would be able to handle any type of case, have holding cells for defendants, and secure parking for judges as well as 240 spaces for on-site parking for support staff, visitors, and jurors.

The expected cost is $91 million.

The money comes from assessments on traffic and criminal convictions – not from the budget of the trial court. The cash is supposed to be put in a trust fund, but the Legislature more than once has tapped into the account for its own purposes.