Five people from Fresno who were in South Lake Tahoe for a birthday celebration died Saturday when their plane sputtered and then nosedived into a field just after taking off at 9:45pm.

Francisco de la Mora, who owned the Piper Cherokee, was piloting the single-engine fixed wing craft. Shannon D. Fleck is the other person the plane is registered to.

With de la Mora were his wife, their 5-year-old daughter, and Harold and Kin Cardwell. The plane could seat seven. De la Mora owned JDM Transport, a trucking company, in Fresno. Harold Cardwell was an insurance agent. Information about the victims is still not complete. 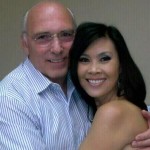 “I’m sure he was flying right-hand on this plane,” Stephen Buxton told Lake Tahoe News of Harold Cardwell. “He was an incredible pilot. I’ve flown many times with him. He is the one who taught me to fly.”

Buxton had known the 60-year-old Cardwell for more than 30 years. They met in church. While Buxton is now a pastor in the San Diego area, he never ministered to Cardwell. But Cardwell, who owned an Allstate Insurance franchise in the Fresno area, was Buxton’s agent for several decades.

According to Buxton, two adult daughters from a previous marriage survive Cardwell.

Officials from Mountain West Aviation, which runs the plane operations at the local airport, told investigators the Piper landed Aug. 25 at the South Lake Tahoe airport for a few hours and that the occupants requested a taxi. No gas or other services were requested. 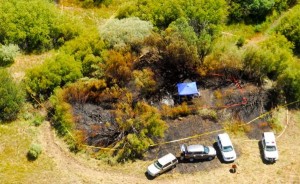 A 1-acre circular area burned after a plane crashed Aug. 25 after taking off from Lake Tahoe Airport. Photo/Claire Fortier

The cause of the crash is not likely to be known for some time as federal investigators do their job. The fuselage is all that remained of the plane after it disintegrated upon impact.

Federal Aviation Administration and National Transportation Safety Board officials have been scouring the site.

Witnesses told authorities they heard the plane sputter before it crashed. It also appeared to bank right, which could have been an attempt to get back to the airport or to avoid the heavily populated area at the end of the meadow.

The plane, according to authorities, needed most of the runway to take off – which is not usual and should have been an indication something was wrong before the plane left the ground.

According to the National Weather Service in Reno, the wind at Lake Tahoe Airport at 9:45pm Aug. 25 was out of the south at 4 to 8mph, so that was not a factor. Plus, it was a clear night. 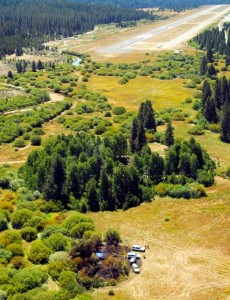 The pilot was unable to gain altitude after take-off. Photo/Claire Fortier

“They will be out there all night. They will probably remove the bodies sometime tonight,” El Dorado County sheriff’s Lt. Pete Van Arnum told Lake Tahoe News of investigators. “From what I saw, we’ll probably have to go to X-rays and dental charts (for definite identification of the victims).” He added that could take a couple days.

A fire immediately started after the plane crashed Aug. 25. About 1 acre of brush burned a circular area.

This same plane was involved in an accident on March 5, 2005, in Destin, Fla., according to the National Transportation Safety Board. In that accident the two people aboard were not injured. At the time it was registered to other people.

NTSB records said the cause of that accident was, “The pilot’s inadequate compensation for wind during a crosswind takeoff resulting in a loss of directional control and subsequent collision with terrain.”

The last plane crash at Lake Tahoe Airport was Aug. 5, 2007, which killed the Bay Area pilot on impact when he took off on a summer morning heading south. On Aug. 19, 2002, a single engine plane went down near Meiss Meadows after taking off from Lake Tahoe Airport. The Bay Area couple on board died. That crash ignited what became known at the 294-acre Showers Fire.