Even if someone were arrested or admits to having been responsible for the Angora Fire, he or she may never be punished other than through their own guilt or if vigilantism takes over.

It would depend on the state and/or federal charges that could potentially be levied against the person or persons if he or she would be brought to justice. Various statutes of limitations have passed or are close to passing.

Hundreds of people were interviewed after the June 24, 2007, fire that reduced 254 houses to ashes. It was almost immediate that fire investigators located the ignition point near Seneca Pond in the Upper Truckee neighborhood on the outskirts of South Lake Tahoe.

“On the second day of the fire a group of us narrowed it to the general origin area,” Beth Brady, fire investigator with the Lake Tahoe Basin Management Unit, told Lake Tahoe News.

While a person of interest was questioned extensively, not enough evidence could be secured to arrest that person.

“We often go after wildfires civilly instead of criminally. It has to do with intent,” explained Lauren Horwood with the U.S. Attorney’s Office in Sacramento. “Arson is willful, deliberate. If it’s negligence, that is different than a crime.”

The El Dorado County District Attorney’s Office is now the lead agency on the investigation. Investigator Bill Dillard told Lake Tahoe News tips still occasionally come in and all are followed up. 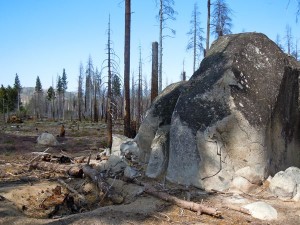 What the area near where the Angora Fire started in 2007 looks like five years later. Photo/LTN

“In this particular case I have a strong suspect lead, but I don’t feel like there is enough probable cause to go forward,” Dillard said.

Because of the intensity of the fire Brady and others were not able to get into the Seneca Pond area the first day. But she knew based on reports from firefighters first on the scene and the fire’s behavior where it was likely to have started before stepping into the forest.

With the houses already destroyed, this blaze was significant on Day 1. A high-level fire investigator was brought in to see if he would narrow the ignition area to Seneca as well without being told what others were thinking. He came to the same conclusion.

Investigators use a process adopted by the National Fire Protection Association to track down where a fire started.

“We work our way backward following burn patterns and marks left on trees and rocks,” Brady explained. Witness statements factor in as well.

After the larger perimeter is established, investigators begin looking for micro indicators of the fire’s origin.

“We still look for marks left, but we could be on our hands and knees looking at individual pebbles or grass stems,” Brady said.

Angora was determined to have started by a campfire that was not fully extinguished. This is a locals spot; a known spot for young people to party. Seneca is a decent size pond about a quarter mile in from the houses on Seneca Road. Beyond it are some large granite boulders, with the largest one being the closest to where the campfire was.

“At this particular campfire there was limited forensic evidence, but there were certain characteristics of the campfire that were unique. But for the integrity of the case we don’t want to describe what they were,” Brady said. “I will say it did not have evidence of a large party fire we see in the woods … where there is a big bonfire and lots of beer bottles around.”

Without being shown where the starting point was or being a fire investigator, it would be impossible to know where the location is.

But looking around, surveying the area today, lush green is just to the south of the spot. The winds swirled that Sunday, bringing the fire close to the streets that lead to this play area before flames whipped north up Angora Ridge and through the neighborhood just below it. So many trees here and elsewhere in the burn area are white. The bark is gone. It’s like they are skeletons of a forest.

“I hope and pray that one day we will find out who is responsible and we hold them responsible so there is closure for this community,” Dillard said.

Note: Anyone with information regarding the Angora Fire investigation is encouraged to contact Bill Dillard at william.dillard@edcgov.us or (530) 903.8041.