The Angora Fire was a significant and emotional event for the U.S. Forest Service Lake Tahoe Basin Management Unit, just as it was for the community as a whole. Many of our employees are members of the Meyers community, and experienced the emotional trauma of evacuation or learning of homes that were damaged or destroyed. Our wildland firefighters joined firefighters from our local districts and CalFire, among others, all of them true heroes as they fought to contain the wildfire and protect our neighborhoods from further harm.

Five years later, I want to take a moment to look back and see how far we’ve come. But I also want to look to the future, and the work that’s left to do.

In the fire area itself, we’ve made significant progress, including addressing immediate safety concerns, preventing erosion and runoff, and thinning trees to reduce fuel that could feed another wildfire in the decades to come. We’ve also planted thousands of native trees to help restore a healthier forest. During the summer, we’ll be continuing fuels reduction and working to improve our road and trail system. In the next few years, restoring Angora Creek and Seneca Pond will close out our efforts to restore the fire area.

Most residents of the Lake Tahoe Basin probably know by now what I mean when I say fuels reduction – thinning trees and removing brush that could allow a wildfire to spread rapidly and with greater intensity. The Angora Fire gave our fuels reduction treatments their first test. These treatments proved very effective, performing as intended in dropping the fire down to the forest floor and providing firefighters a safer place from which to defend the neighborhoods. Their effectiveness could clearly be seen in the still-green trees that remained in many of the treated units.

In the early days of our fuels reduction efforts, we often heard from residents and long-term visitors who were taken aback by the appearance of the forest after we thinned the trees. In the years since Angora, the community has become much more accepting of fuels reduction and prescribed fire. We will depend on this support for active management as we implement the South Shore Fuel Reduction and Healthy Forest Restoration Project, meant to help protect Lake Tahoe’s largest community from wildfire.

During a span of eight years, we will complete initial treatments to reduce forest fuels on more than 10,000 acres, from the Nevada state line to Cascade Lake. For the first time on the California side of the lake, we’ve reached agreements with regulatory agencies that will allow us to effectively treat stream environment zones, using chainsaw crews and mechanical equipment. We’re working with our partners to develop projects that reduce risk to our communities while respecting our environment. With the Incline, Carnelian and West Shore projects in the planning and permitting phases, we must all remain committed to streamlining the approval process and getting projects on the ground. 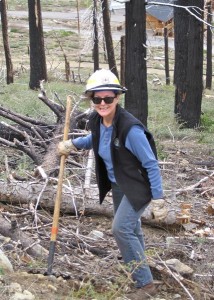 While we’re making progress on many fronts, I am concerned that we’ve failed to heed one of the most critical lessons of the Angora Fire. On June 24, 2007, the simple, thoughtless act of making an illegal campfire and leaving it burning on a windy day caused hundreds of families to lose their homes and forced thousands of others to evacuate. Despite the teachable moment provided by this devastating fire, human activities remain the cause of most wildland fires in the Lake Tahoe Basin. The Forest Service is proud of our record for wildfire suppression. But given the wrong mix of conditions, any one of these fires has the potential to become another Angora.

As we approach the summer after an exceptionally dry winter, I know we’re all a little uneasy. Let’s focus that energy on remembering the hard-taught lessons of Angora and preparing the best we can. As forest supervisor, I’ll be working with our staff to implement forest health and fuels reduction projects. At home, I’ll make sure I’ve done my defensible space, stay alert to fire danger and prepare an emergency plan for my family. I hope you will do the same. Please stay safe this summer.

Previous post : No arrests ever made in Angora Fire Next_post : Community garden sprouts from loss of family home