My father was the consummate naturalist and environmentalist. He paid attention to his surroundings, and worked hard to ensure that the native flora and fauna had a place to exist. He strove to educate others on the importance of the smallest plant and the largest mountain. He recycled before it was “cool” to do so. And he spent more time reveling in the beauty of nature than paying attention to things man made.

He shared this spirit of the outdoors with my mother, and together they always worked hard to surround themselves with gardens that mirrored the native species of the Sierra. It then made sense that after the Angora Fire’s devastation to their home, that dad would decide to not rebuild, but rather to give back to the neighbors he loved so much by creating a garden.

When we sat down to discuss the concept, there were a few things that he was sure about. First, he wanted it to contain flowers, shrubs and trees that are native to Tahoe. Second, he wanted it to be something beautiful. And lastly, he was adamant that his beloved neighbors have access to the property.

Sadly, my father did not last too much past developing his initial idea. He was 90 years old at the time of the fire, and the event had taken its toll. Two years later he succumbed to old age and congestive heart failure. But the idea lived on, and after sharing the idea with the Tahoe Resource Conservation District (TRCD) we started to conceptualize on paper.

My history with the wonderful folks at TRCD had been steeped in education from the beginning. As a defensible space inspector for Lake Valley Fire Protection District, my job was to be a “landscape therapist” of sorts for homeowners whose surroundings put themselves and their neighbors at risk for spread of fire. As has been demonstrated in fire after fire across the nation, defensible space can make the difference between a bit of smoke damage to a house and total loss. I was tasked with showing our constituents how their property can be altered and managed to create a fire-safe environment while being pleasing to the eye.

TRCD was developed to help people protect land, water, forests, wildlife, and related natural resources with backyard conservation programs. They also work with their partner agencies to integrate all aspects of their conservation programs with fire defensible space, water conservation, fertilizer management and wildlife habitat enhancement. They are a non-regulatory, grant-funded, not-for-profit agency.

The gazebo beckons people to sit for a bit. Photos/LTN

We all worked together at various public events, and eventually started inspecting properties together so that we weren’t telling the homeowners conflicting procedures and regulations. It was obvious that we all shared a strong sense of our natural environment and appreciated the uniqueness of our surroundings. In sharing my dad’s vision, my enthusiasm for the project caught on and soon we had ideas on paper. Drawings led to gaining support from others. Encouragement led to funding sources. And finally, the first dedication ceremony was June 6, 2009, where our first deciduous tree – a maple – was planted. 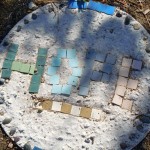 Protection District, South Tahoe Public Utility District, Aspen Hollow Nursery and Tahoe Outdoor Living. A mound of dirt was placed on the property so that we could demonstrate plants and stabilization alternatives appropriate for sloped properties. Three large cedar trees were planted on the mound – compliments of my uncle and aunt, Dan and Sydney Kurtz – which were followed by several other evergreens. Deciduous trees were planted and a riparian area was formed, complete with a conveyance swale lined with rock.

Paths were also designated, and with the hard labor of many volunteers decomposed granite was carefully placed to encourage foot traffic and prevent erosion. Lake Tahoe Community College’s Demonstration Garden donated four fruit trees that had to be removed from their property, and the wildlife garden 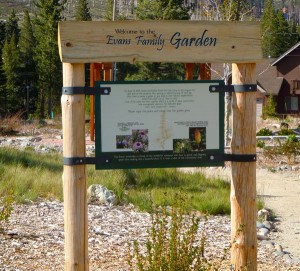 The Evans and Allen families demonstrate a sense of community by giving the neighborhood a garden of growth.

started to take shape. Plants and shrubs were carefully placed by members of local garden clubs, and birdhouses were built by the Boys and Girls Club. As winter settled on the property, a real garden had begun to take shape. To my amazement, before the snow fell we were witness to an array of wildflowers blooming – columbine and monkey flower to name a few.

During the first year’s work, we realized that a corner of the garden was starting to sprout on its own without help from anyone. It was decided that this area should be allowed to come back without our intervention to demonstrate how natural recovery from a fire takes place.

In 2010, the snows melted early and we were able to start work in earnest. The first things I noticed upon setting foot on the property that year was that the trees had buds on them – a good sign that they were taking root. Best of all, however, was a mother bird hovering near the birdhouse. Her eggs were inside. Later, we were to find evidence of a robin’s nest in the cedar trees. The local wildlife had found the garden, and approved.

We immediately started working on irrigation issues with a drip system. All of us had taken turns watering the garden as needed, but a drip system would save water and give our volunteers some time to themselves. We also planted more in the riparian area with the assistance of the local Girl Scout Troop and their beautiful hand-made garden tiles. The South Tahoe Rotary Club came for a day of major planting and soil moving.

On Father’s Day of that year, I sat on the garden wall to see the progress that we had made. To my delight, that was the day chosen by the birds to try their first flight. I was able to watch the young birds as they tried out their wings for the first time, looking much like Snoopy’s friend Woodstock. After many “first flight” tries and a few crashes, the youngsters were able to make it around on their own.

The summer saw many volunteers in the garden, including a group of Russian students and an environmental educational program from the American River Conservancy/Sierra Epic Adventures. With their help, many new plants were placed in the garden and a lot of weeding was accomplished.

In my hours spent at the garden, I also watched people walking by and talking about the flowers but never setting foot on the property. We realized that a “welcome” sign of sorts was needed, and began the design of our interpretive sign. With the most generous assistance of Angie’s Signs, we created a work of art that explains the garden’s purpose and encourages entrance to the property. From then on, neighbors and visitors alike began to come on to the paths and explore the work being done.

The other planned structure was an arbor, which represented the home in the defensible space equation. My husband, Mark, and our friend, Michael Keiser, were put to work. Both had backgrounds in construction and woodworking, so the task suited them perfectly. Before we knew it, a beautiful redwood arbor had been completed at the rear of the property, complete with benches that could house tools and equipment. The timing was perfect, as winter again ascended on the garden – this time with a blanket approximately 4-feet high.

As we all know, the summer of 2011 got a late start. By the time the snow melted, the flowers were very ready to bloom. All the winter’s moisture proved to do well, and the garden was rife with currant, serviceberries, lilacs, iris, lavender, thyme and daisies. Nature at its best. As well as a cottage garden and some wildflowers, we built two raised beds and a moveable compost box. With several organically grown starts, we planted zucchini, tomatoes, peppers, mint, rosemary, cucumbers and potatoes. Much to my pleasant surprise, the garden exploded with produce — only the cucumbers didn’t succeed. As of the writing of this article, I am still knee-deep in blanched and frozen zucchini (which comes as no shock to those who have grown it, I’m sure!).

We also found ourselves doing a lot of maintenance work on what we had already planted. After all, what is a garden without invasive species, pruning needs, voles, and weeds to keep us busy. But with the generosity of our volunteer gardeners and the TRCD staff, we watched the winter take over feeling satisfied that our garden had taken shape quite beautifully.

So now begins another season of planting, mulching, repairing, digging, volunteering, and generosity. We look forward to this time of growth, and welcome anyone who wishes to help out. You can check out the garden at www.evansfamilygarden.org or contact TRCD at (530) 543.1501 – ask for Jennifer Cressy or Courtney Walker.

And thank you to the folks who have donated so much to our project:

Previous post : USFS: Looking back at Angora provides lessons for the future Next_post : Free concerts 6 nights of the week on North Shore