With international and U.S. Olympic officials paving the ski trail this week for future bids in the States, organizers of a bi-state coalition to bring the 2022 Games to the Tahoe-Reno region solidified their dedication to the monumental effort.

It’s early, and there’s a lot to do. But great feats don’t happen overnight – and resolution is always within reach to those who go for the gold. The International and U.S. Olympic committees agreeing on a revenue sharing plan in Quebec City after a two-year quagmire may serve as proof to that. 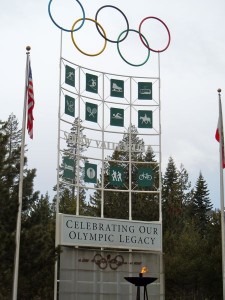 The Olympic flame may be reignited in 2022 in Lake Tahoe. Photo/LTN

The last time the United States hosted the Olympics was 2002 in Salt Lake City and before that 1996 in Atlanta. In the last decade, the nation was perceived to have been snubbed.

The two entities were debating over a 1996 pact in the level of sponsorship revenue and broadcasting rights. The IOC believed the U.S. share was excessive. In the end, the USOC would take a lesser percentage after 2012 and absorb $20 million in Games costs, the Washington Post reported Wednesday.

Further details will be available next week, Lake Tahoe-Reno regional coalition Chief Executive Officer Jon Killoran, who was in Canada for the meetings, told Lake Tahoe News. He deferred comments to Squaw Valley-Alpine Meadows Chief Executive Officer Andy Wirth. Squaw was home to the 1960 Winter Games, an event made possible by the insurmountable persistence and vision of the late Squaw founder Alex Cushing.

Wirth, the interim chairman for the Lake Tahoe Winter Games Exploratory Committee, told Lake Tahoe News “any kind of progress” is a good thing for the ambitious effort.

“On one hand, it’s great news. On the other hand, we have a lot of work to do,” he said. “And regardless of this news, our effort really hasn’t changed.”

The introductory stages for Tahoe-Reno have included filling out a board of up to 25 members. The panel is currently 20 members – full of high-powered talent. Among the members are Nevada Lt. Gov. Brian Krolicki, former Squaw owner-executive Nancy Cushing, Vail Resorts co-President of Mountain Operations Blaise Carrig, Reno Tahoe International Airport chief Krys Bart and Olympian Daron Rahlves, one of the greatest men’s downhill racers of all time.

Now the coalition wants to organize an environmental standards committee to handle some of the biggest concerns surrounding the Reno-Tahoe bid. Denver and Salt Lake City are also vying for the 2022 Games, with Bozeman, Mont., joining the quest.

“This could be the most intriguing part – to have an environmentally sensitive Games,” Wirth proposed.

One board member would lead the to-be-formed environmental committee, which is described by the Squaw head as one of “the most tangible things” the Games coalition has worked on.

The effort to bring the Games back to Tahoe started in 2001 with Reno sports commissioner Jim Vanden Heuvel, who died three years ago. The drive has enlisted the assistance of California Lt. Gov. Gavin Newsom, state Sen. Ted Gaines, R-Roseville, and a San Francisco Bay Area sporting event group.

The USOC could decide to focus its attention on the 2024 Summer Olympic Games. Either way, a layer of tension has been lifted with the May 23 news.

“It’s good if we have an agreement because this has created difficulties in the relations with USOC,” Swiss IOC executive board member Denis Oswald said early Tuesday according to an ESPN report.