El Dorado County sheriff’s deputies are noticing an upturn in the number of reported ski and snowboard thefts from ski resorts in the Lake Tahoe area.

“People just decide not to use secure facilities. People, I think, this time of year get sloppy,” sheriff’s Lt. Les Lovell said. 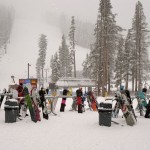 The department will be working with Sierra-at-Tahoe and Heavenly Mountain Resort to set up sting operations.

Sierra said it has reduced the number of ski and snowboard thefts every year for the last five years. The resort also prosecutes to the fullest extent of the law. Officials would not release specific numbers.

“We did not have any more incidents than is considered normal activity on a holiday weekend,â€ Kirstin Cattell, spokeswoman for Sierra, said of this last weekend. “A lot of people pick up the wrong rental board and don’t realize it. By the end of the weekend it all gets sorted out because people return it any ways.”

Heavenly officials did not respond to an inquiry about thefts at the South Lake Tahoe resort.

Lovell said for the past decade snowboards were the item of preference among thieves. He said lately, though, skis are rebounding as being desirable to snag.