I’m guessing the last time I had a French dip sandwich was when I lived under the roof of my parents’ house. That’s what happens when you become a vegetarian.

It’s amazing how portabella mushrooms can be such a wonderful substitute for beef. I’m not sure why it took so long to figure out this would work well.

Sandwiches are something I tend to eat more of in the summer than winter, but this is so hearty that I can see making it year-round.

Be aware that regular Worcestershire sauce has anchovies. There are vegan varieties available.

I bought the mushrooms presliced to make things easier.

To have the sandwiches all done at once it will be best to put them under the broiler to melt the cheese. I only made two and just zapped them in the microwave. Swiss is the traditional cheese used on French dip, but you could use something else. I would stick with a white cheese, though. 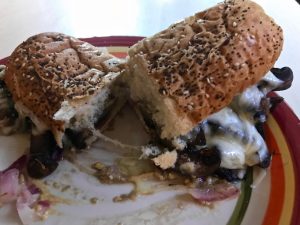 Heat butter and 1½ teaspoons of oil in a large skillet over medium. Lower heat to medium-low, cooking until golden. Then add salt, stir.

Heat 1 tablespoon of the oil in a separate large skillet over medium-high. Arrange half of the mushrooms in skillet in a single layer and cook until golden-brown on both sides. Place mushrooms in a bowl. Repeat process with remaining 1 tablespoon oil and half of mushrooms.

Combine mustard and horseradish. Spread on top halves of rolls.

Divide mushrooms onto bottom half of rolls. Pour au jus into four ramekins.