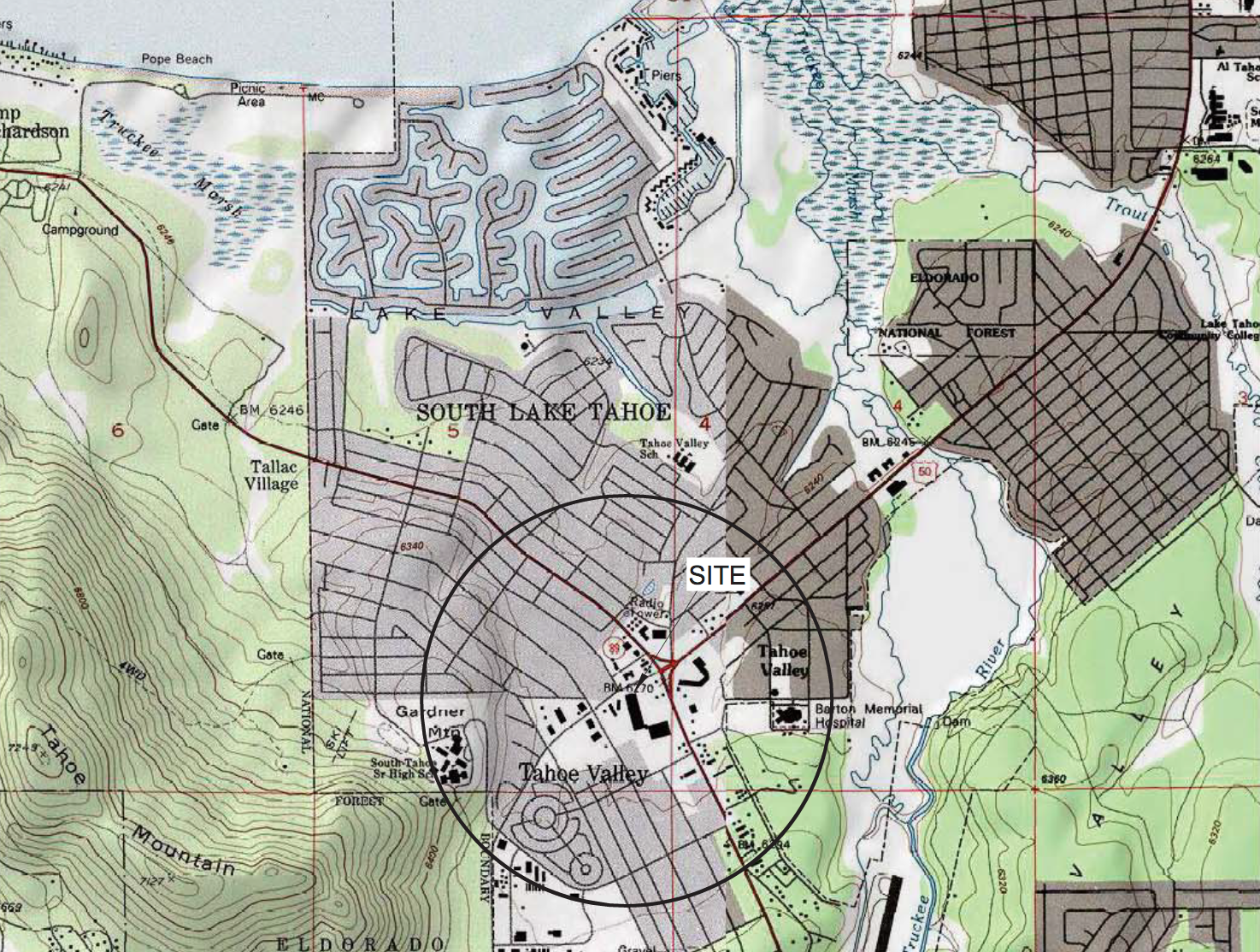 The circle represents the known area of the PCE plume in South Lake Tahoe. Image/LRWQCB

After decades of a toxic plume percolating underground near the Y in South Lake Tahoe, the state has set hard deadlines for the responsible parties to do something about the situation.

Tetrachloroethylene, or PCE, has adversely affected the drinking water in the area, necessitating that wells belonging to Tahoe Key Water Company and Lukins Brothers Water Company be taken off line. Lukins and the Keys water systems are building filtration units to treat their water so the inactive wells can be put back into service.

Research shows the chemicals were released from the Lake Tahoe Laundry Works, which was located at the Y in the Raley’s center. That is a known source for PCE contamination and had originally been thought to be the source of the plumes below TJ Maxx and Classic Cue. PCE at the Y was first detected in 1989. Since then more than one PCE plume has been found.

PCE was a commonly used chemical in dry cleaning and automotive businesses. California in 2008 banned new PCE machines. And all such machines are to be out of commission by 2023. However, PCE will still be able to be used.

A letter dated May 12 was sent by Lahontan to Seven Springs Limited Partnership, Fox Capital Management Corporation, Bobby Pages Inc., and Connolly Development Inc. Each has 75 days from that date to provide a work plan to Lahontan. There may be some back and forth to get to a work plan that is agreed to by the state agency and the four known responsible parties. Those four entities will then have 30 days to implement the plan.

“We are pleased to see that the cleanup and abatement order issued by the Lahontan Regional Water Quality Control Board now recognizes that there is insufficient evidence to attribute the regional PCE plume in the South Lake Tahoe area solely to the former dry cleaner. Fox welcomes the regional board’s desire to identify all of the contributing sources to the contamination, and to ask all responsible parties to address the associated environmental concerns,” Scott Reisch, attorney representing Fox, told Lake Tahoe News. “A Fox predecessor was the general partner of a now-dissolved entity that formerly owned the site in the 1970s and early 1980s, while a dry cleaner operated at the site. Fox never owned or operated the property.”

For the past eight years Fox has been working to remediate the PCE issue.

“What is new and different is they have never fully delineated the plume; where it begins and ends, that is their responsibility,” Patty Kouyoumdjian, executive director of the Lahontan Regional Water Quality Control Board, told Lake Tahoe News.

The depth and length of the plume will be determined in this new work plan that will be developed.

Kouyoumdjian said one outcome is to determine who is responsible for what. It may be that other parties not known today will be uncovered.

There has been disagreement among named parties and Lahontan about who is responsible, especially based on movement of the plume.

In an April 4 letter to Lahontan from PES Environmental, an engineering and environmental services firm representing Seven Springs and Fox, it criticizes the water board for dismissing studies without reason, and questions its findings. The two sides can’t even agree on which direction groundwater flows from the old laundry site. PES contends the data show there are multiple sources for PCE, not just the dry cleaners.

Lahontan plans to have a public meeting, possibly in June, to gather more input on the topic.

Getting the work plan in place should also open doors to funding sources, including from the State Water Board.

“This is an important step forward to deal with the regional plume and finding a final cleanup plan for the entire plume and make sure we protect our drinking water resources that are precious,” Kouyoumdjian said.

Until further tests are done it’s not immediately known how the heavy winter snowfall and subsequent rising of the groundwater table may have impacted the plume.