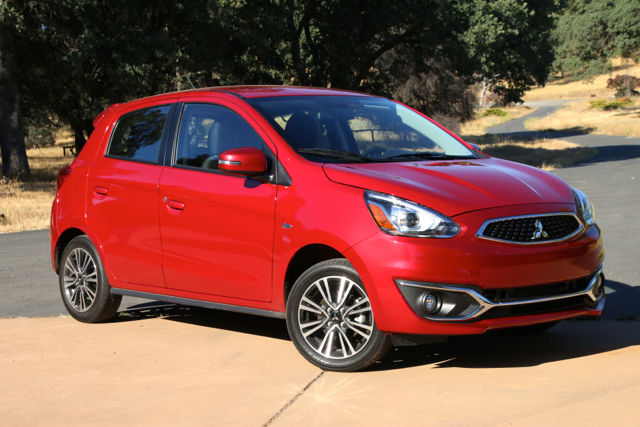 Improvements to the 2017 Mitsubishi Mirage make it an even more desirable car. Photos/Larry Weitzman

With a starting price of less than $13,000, almost anyone can afford a new car, especially one that gets over 40 mpg and comes with a standard powertrain warranty of 10 years and/or 100,000 miles. Considering just that info, the Mitsubishi Mirage is a great deal. And the price has not increased from 2016 to 2017, even with the significant improvements, still a fin below $13K.

Obviously new for 2017 is the front end styling, much sleeker and more modern. It isn’t stodgy looking anymore. Even the co-efficient of drag has been reduced to 0.27. When I first saw the new Mirage, I was impressed with its new design to the point of remarking to a friend as to its newfound good looks.

While its wheelbase is the same, long 96.5 inches, its length grew by an inch to 149 inches, otherwise its dimensions remain the same with a width of 65.6 inches and a height of 59.4 inches. Even its ground clearance is still 6.3 inches. But mechanically the engineers have improved the suspension with changes in spring rates and damping along with a new front stiffener. In the engine bay the Mirage gets new lower friction, roller bearing camshafts (instead of plain bearings) and four more hp and for whoa power, larger front disc brakes and bigger rear drums. 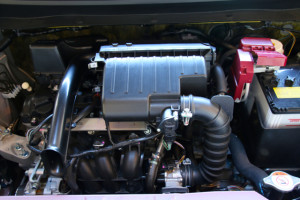 New roller cams improve engine efficiency of the little 1.2L DOHC, 12 valve three-cylinder inline engine by cranking out 78 hp at the same 6,000 rpm (up four hp). Torque which is mostly a function of displacement (A good rule of thumb is a pound of twist per cubic inch of displacement and this mill has 73 cubes.) remains 74 pounds of twist at the same 4,000 rpm.

Transmission options are also the same, a five-speed manual or an efficient CVT, which is optional on the ES or SE models and standard on the top of the line GT. In my GT the CVT was the perfect application.

Performance-wise not much has changed but the tranny now lets the engine revs a little higher in the powerband from my last Mirage test. Zero to 60 mph times have improved marginally by a couple of tenths to 10.28 seconds and 50-70 simulated passes also had their times shortened with a 50-70 mph run taking 5.68 seconds and an uphill run dropped by more than a second to 11.61 seconds. As I reported before this little Mirage would blow the doors off a ’55 Chevy Belair V-8 with a Power-Pak making 180 gross up. So depending on your standards, this little Mirage scoots pretty good.

But beside its low price and diminutive size, the other main reason to acquire a Mirage is fuel economy. EPA rated at 37/43/39 mpg city/highway/combined, real world numbers during my test was about 5-10 percent better averaging 42 mpg overall and 45-46 mpg on a level highway at 70 mph in a two-way run. In a round trip from Placerville to South Lake Tahoe, which includes a 6,000-foot climb over the Sierra the little Mirage averaged 47.6 mpg. The drive included some full throttle passes but speeds were kept a max of 60 mph. On the negative size is the small 9.2-gallon fuel tank, limiting range to about 360 miles while still maintaining some fumes as a reserve. How about a couple of more gallons in the tank?

Suspension is MacPerson struts up front and a semi-independent torsion beam in the rear. Tweaks to spring and shock rates sharpened the handling slightly, but the Mirages have always been nimble. Remember the Mirage only weighs 2,117 pounds which makes it easier to change directions. Steering is quick and the electric power rack has a turning circle curb to curb of 30 feet. Add two feet for the wall-wall number. Tire and wheel fitment are upgraded on the GT to 15 inch alloys and wider and lower profile 175/55X15 tires. 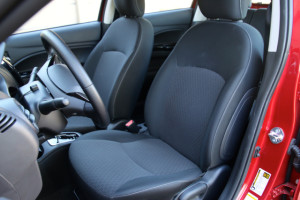 Comfort has not been sacrificed.

Also surprising was the smooth and quiet ride. Because of its relatively long wheelbase the ride is anything but choppy. It is actually supple and compliant. The engine spins a low 2,200 rpm at 70 mph and the cabin is quiet and there is no wind and road noise.

Brakes are strong with a full complement of acronyms (ABS, etc.). Also contained in its suite of safety are active stability control, traction control and no less than seven airbags.

Inside is an upgraded interior. Seats are comfortable in front, but I didn’t check the rear bench. The instrument panel is complete with a tach and speedo plus a trip computer. The vertical stack is also complete with a four speaker stereo and A/C. Even the base model comes standard with full power, steering, brakes mirrors, and windows. Stepping up to the SE ($14,795) adds a rear view camera, Bluetooth and cruise control among a long list of standard features.

For such a small car, inside is quite big. There is 86 cubic feet in the passenger compartment which is only about seven cubes less than your average compact. In addition, when you fold down the rear seats it can swallow 47 cubic feet of cargo which is as big as some mini CUVs. With the rear seats up cargo capacity still exceeds most compacts at 17 cubes.  Surprisingly the Mirages payload is over 900 pounds as its GVWR is 3,020 pounds.

As stated at the beginning, a base Mirage starts at $12,995 plus $835 for the boat from Chonburi, Thailand. This is a true world car. With the GT, which stickers for $16,495 plus the $835 or an all-in price of $17,330, there are no factory options. Even heated seats and the fabulous HID headlights are standard along with the CVT transmissions. I found nothing wanting. This is a surprising good car that is actually shorter than a standard Mini-Cooper by 4 inches.

Previous post : Fire damage may be too great to save Queen Next_post : CTC plans to sell property near the SLT Y