A ski area executive with deep roots in the industry was groomed by Vail to take the helm of the resort known for deep snow.

Doug Pierini returned to the Lake Tahoe region, coming on board Kirkwood Mountain Resort as vice president and general manager this summer. At 46, the former vice president of skier services at Breckenridge Mountain Resort in Colorado has a long history with ski resorts. Both resorts fall under the Vail Resorts’ umbrella.

His parents were part-time ski instructors in upstate New York. Skiing the Catskills was a part of everyday life for Pierini (which means knowing how to ski on ice). He raced as a youngster, and after graduating from Rutgers University in New Jersey with a degree in economics, he headed west in search of the perfect turn.

He started in Jackson Hole, Wyo., where for a decade he worked in ski school and management. From there, he’s worked stints at Alpine Meadows and Sierra-at-Tahoe, locally. Globally, he’s also manned posts in the famed Portillo area of Chile, in addition to Mt. Buller in Australia. He’s had jobs at Steamboat Mountain Resort in Colorado and Plattekill Mountain in New York. 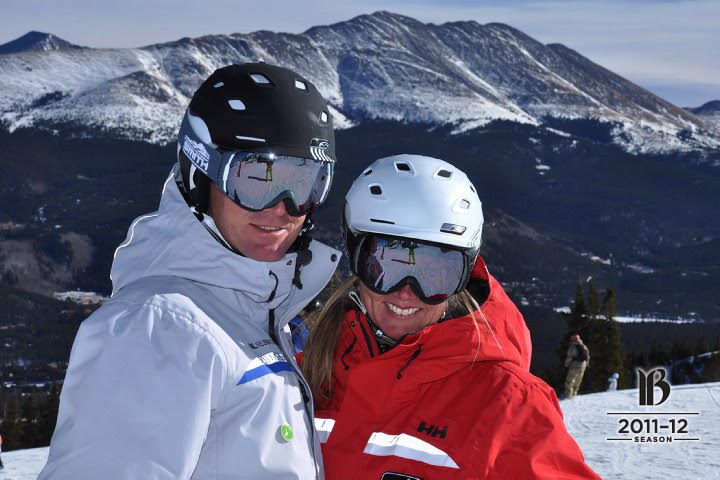 Doug and Leigh Ann Pierini make skiing a priority for their family. Photo/Provided

In between assignments, Pierini served on the Professional Ski Instructor Association national team, where he developed ski technique and training programs. This means training the trainers. He also maintained the high honor of taking a slot on the National Alpine Team for the United States.

But it was his time at Breck that really showed off his skills in management as vice president of skier services.

One could call Pierini an expert at teaching wannabes the finer skills of skiing. He started instructing in the 1980s. About the only people whom he wouldn’t recommend teaching are his own children, and the same advice holds true for other parents.

Still, when asked where his favorite place to ski of all is, he replied: “With my kids, anywhere they want to be.” Pierini has a 9-year-old son and 10-year-old daughter.

Truly a family man, Pierini is all about nurturing the individual nature and spirit of a person.

The Volkl ski purist (he has owned five pairs) plans to do the same at Kirkwood, which for years has developed a reputation as a lone wolf in the Tahoe-area ski resorts. He said he’s quite familiar with Kirkwood’s unique character and plans to maintain it.

Pierini replaces Casey Blann, who has worked at Kirkwood, Heavenly and Sierra-at-Tahoe.

“Casey’s an amazing guy with a good reputation. I feel honored to follow someone like that,” Pierini told Lake Tahoe News.

As for Kirkwood’s pending master plan, he agrees it “needs to be reviewed” but stopped short of implying Kirkwood needs a lot of change.

He wants to tap into Kirkwood stakeholders, community members and employees to get new ideas on how to proceed with the ski resort split between Alpine and Amador counties off Highway 88.

“Right now, we’re going to move forward with what we have,” Pierini said. “There’s nothing glaring Kirkwood needs for now.”

Some have long claimed the resort needs more high-speed chairlifts like Cornice, especially on the backside, but all will come with time. For now, Pierini sits in a pure get-to-know status and has met with numerous people since arriving.

And even his wife, a retired trainer from Keystone ski resort in Colorado, would like to get involved with the community. The family is also big on going out on the sailboat for a different kind of cruiser run.

Being family oriented carries over into his management style – in an egalitarian way.

“As a manager, I’m very team oriented. I place a lot of importance on having a strong team. It’s not all about me. I give a high standard on the brand and don’t like to settle for something mediocre,” he said of his expectations. “At the same time, I like to empower my team.”

The embracing of the team environment made him a good fit for Vail.

“I like how responsible they are as a company. There’s so much they do for the environment,” Pierini said, further insisting the principles are part of the company mantra. “And it’s a leader in the industry with a ton of talent.”

Some would argue that Pierini represents that claim.

“He’s been in a key leadership role. Breckenridge is one of the most visited ski resorts in the country, so certainly he has a grasp of the business,” Vail Resorts Senior Advisor Blaise Carrig told Lake Tahoe News.

Carrig, who managed Heavenly Mountain Resort before moving up the Vail corporate management ladder until he fully retires in October 2017, is familiar with Pierini’s work. He pointed out his excellent attention to service and operational skills as traits that made Pierini stand out for Vail’s upper management.

“He’ll be great for staff and the community of Kirkwood,” Carrig said.

And the ski instructor known for his detailed training regimens was trained intensively himself.

Carrig cited how in 2010 Vail owned five resorts. Six years later, that number has more than doubled. The math adds up to the need for more chief operating officers.

And like most things Vail, there’s no stone unturned in terms of putting a tried-and-true structure in place to get the best leaders for the jobs.

Pierini went through Vail’s internal leadership program and embraced its VRV – Vail Resorts Vision. There are three steps named for scaling a mountain: Camps I, II and III.

“It’s a purposeful program. We’re very focused on successes – performance management successes with leadership development programs and peer reviews. Then we identify people we think have talent, have performed well and have the ability to take over more duties in the company,” Carrig said. “For Kirkwood, Doug rose to the top.”

Carrig wasn’t alone in his observations.

“Doug brings an impressive diversity of experience to his new role and leadership style that I’m confident will be a great fit at Kirkwood,” said Pete Sontag, chief operating officer at Heavenly and regional manager for Vail’s three Tahoe area resorts.