Jeremy Meyers, El Dorado County superintendent of schools, was booked at the El Dorado County jail in Placerville on Aug. 22 on driving under the influence charges stemming from an incident in June. This was a condition of having pleaded no contest to the charges, which is the same as a guilty plea when it comes to sentencing.

He admitted that on June 9 he was driving under the influence with a blood alcohol level of more than 0.08 percent. 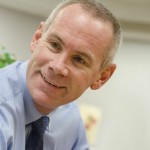 Although the booking statement from the weekend says there were drug charges, the criminal complaint from the district attorney does not. The latter is what ultimately matters and is what the court used for the sentencing guidelines.

The court process has been completed. All that remains is for Meyers to go through a first time DUI offenders’ course, which can take up to 18 weeks. He will also be on probation for four years.

“He was sentenced to five days in jail. That was probably because of the blood alcohol. He was treated no different than anyone else,” David Stevenson with the El Dorado County District Attorney’s Office told Lake Tahoe News.

He was, however, allowed on the night of the infraction to be released into the custody of his wife and friend instead of being taken to jail. The California Highway Patrol cited him that night when they pulled him over on Highway 49.

“I sincerely apologize for this personal mistake. I have already accepted responsibility and am personally dealing with my error in judgment. Most importantly, I want everyone to know that this will not interfere with the great work of EDCOE in continuing to provide quality education for all of the children and families in our county,” Meyers, 44, said in a prepared statement issued by his attorney.

“The El Dorado County Office of Education is aware that county Superintendent Jeremy Meyers was cited for driving under the influence. He is dealing with this matter on a personal basis. EDCOE will continue to focus on delivering quality service and support to the community,” Dina Gentry, spokeswoman for the office of ed, told Lake Tahoe News.

Meyers was first appointed by the school board to the position effective July 1, 2013. He was taking over for Vicki Barber who retired. At the time Meyers was the deputy superintendent. In June 2014 he ran unopposed for a four-year term.