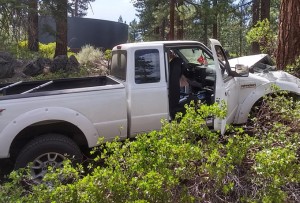 The driver of this truck died hours after being extricated. Photo/Bill Kingman

The driver, whose name has not been released pending notification of next of kin, was going west on Kingsbury Grade near Katherine Drive on July 20 about 2:44pm when his pickup drifted off the road onto dirt and struck a tree.

He was transported to Renown Medical Center in Reno where he later died.

The driver was wearing his seatbelt and impairment does not appear to be a factor, according to the Nevada Highway Patrol.