While there is still lingering snow on some lawns in the Lake Tahoe Basin, the fact that it is barely measurable in most places is indicative of the winter that has barely existed in the Sierra.

The lack of snowfall continues to be illustrated with each snow survey. On Tuesday morning representatives of the state Department of Water Resources were at Echo Summit taking samples of snow to determine the water content. The 6.7 inches of snow contain 0.9 inches of water, representing 5 percent of average for this time of year.

The situation keeps getting worse. Statewide the water content was 50 percent of average in December and 25 percent in January.

On Tuesday, 103 electronic sensors found Tuesday’s snow water equivalent to be 5 inches or 19 percent of the March 3 multi-decade average. This is nearly a record. In 1991, the statewide water content was 18 percent of average. But that same year there was the Miracle March, which brought more precipitation than normal.

But there is no moisture in the forecast for Tahoe in the next week. And highs are expected to return to 60 degrees by Sunday. 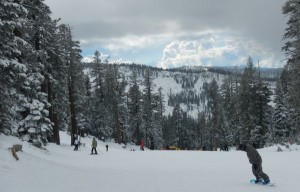 If there had not been a storm in the last week, today’s numbers have would be even worse. And while the storm brought a foot of snow or more to many Tahoe area resorts much to the delight of skiers who were in search of that rare powder day this winter, it will have little impact to the state’s fourth dry season.

While parts of Northern California are faring well when it comes to rain totals, this will not help them much in the summer. This is because it is the snowpack in the Sierra that sustains municipalities and farms downstream, supplying about 30 percent of California’s water needs. Without a snowpack to melt, it will be a trickle that flows into reservoirs. That in turn means less water to be doled out to users.

Already farmers and some Bay Area water districts have been told to count on little or no water allocations from the federal system. Those users will then be tapping into the groundwater, which is already severely depleted in some areas.

Adding to the concern is that users are not conserving as well as they had been earlier this winter. The state Water Resources Control Board on March 3 announced a steep decline in water conservation from 22 percent in December to approximately 8.8 percent in January in year-over-year water use comparisons.

The state Water Board on March 17 will consider renewing an emergency regulation supporting water conservation that was adopted last July. It restricts outdoor water use and authorizes penalties for water waste.