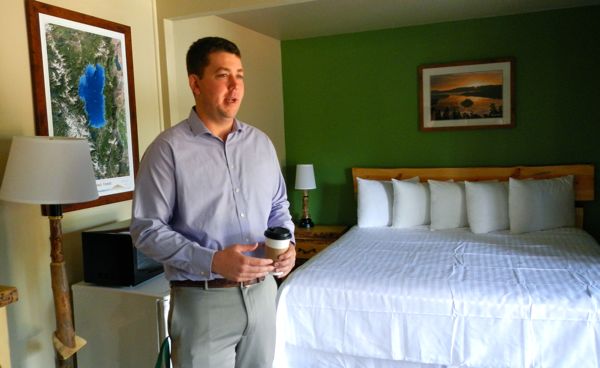 There is one less hotel in South Lake Tahoe renting by the week or month.

The Vagabond Inn on Highway 50 is now the Trailhead – A Lake Tahoe Lodge.

Owners from China took over at the first of the year, having paid $1.3 million for the property that is walking distance to the state line. The half a million dollar-remodel began after the ski season ended. Of the 34 rooms, five are deluxe. And more improvements are planned.

“I want the entrance and exit off Midway (Road) and I want to get rid of the pool. It’s from 1959,” Chris Nielsen, general manager of the property, told Lake Tahoe News. The pool is empty and unusable. 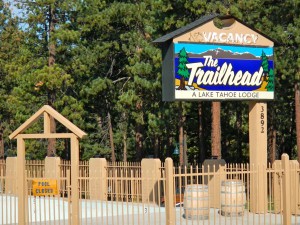 Removing the empty pool near Highway 50 is a goal.

The hotel was originally the Brooks Lodge in 1947. In 1959, it was remodeled to accommodate visitors coming to Lake Tahoe for the 1960 Squaw Valley Winter Olympics. In the 1980s it became a Vagabond – and remained that until June 1.

It had become rundown and was attracting a different clientele than it is today. Now the hotel wants to compete with the likes of Holiday Inn Express and 968 Park.

Every room has new beds. Nielsen was surprised when the mattresses from 1993 were being snatched up by other hoteliers in the neighborhood.

Gone, too, are the blue floral bedspreads from the 1990s, and 1980s-era televisions.

Tahoe Timber Uniques created all of the lamps. Like its name, each one is unique.

The goal was to have the rooms feel like a guest is in Tahoe instead of Anyplace, USA. This was also accomplished with the array of old Tahoe photos on the walls.

Two rooms have a king bed plus a bunk bed. This is designed for families – whether it’s parents with kids, or three generations traveling together.

Nielsen has a ton of ideas about what he would like the property to evolve into. He said it’s just a matter of the investors cutting a check.

“I want to bulldoze the parking lot. I would like to have a restaurant,” Nielsen said standing on the walkway of the second floor.

He knows this would help with the slow off-seasons by being able to attract locals to the property. His vision is to have quick, good food to go that people could order ahead of time and take with them to the beach or wherever. 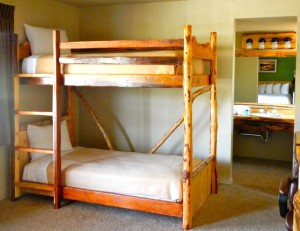 “We could have a mobile app where they put in their food order and have it ready when they get here,” Nielsen said.

Nielsen also envisions getting rid of the room closest to the office and possibly putting in a small wine and beer bar with a patio.

To build on the Trailhead name of the hotel, the office is stocked with maps from the U.S. Forest Service about where people can go exploring. Plus, Nielsen has been working in the hotel industry locally and knows what’s expected in terms of being able to direct people to restaurants and sightseeing destinations.

A continental breakfast is served each morning. Dogs are allowed for $20 per night. There is a grassy area out front for them.

The word is getting out about the transformation of the hotel. The Trailhead was sold-out Fourth of July and has been doing steady business all summer.