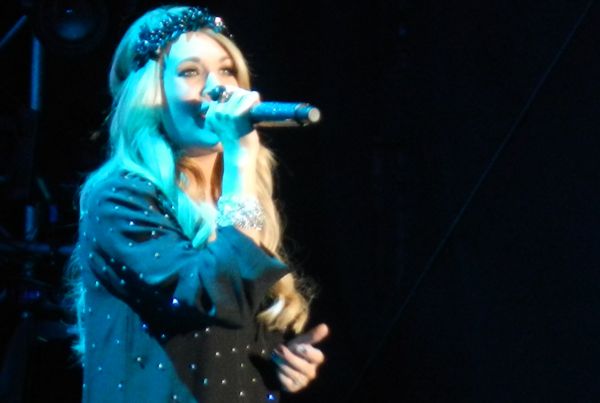 STATELINE – From sultry to raunchy to melancholy to edgy – Carrie Underwood’s vocal delivery is as expansive as her lyrics.

On Friday she was a bundle of energy that charged the crowd at Harveys Outdoor Concert Series. So many in the audience were singing right along with her.

With multiple hits year after year, it seems like Underwood has been part of the country music scene for decades. But the 31-year-old wasn’t discovered until she won “American Idol” in 2005.

Her first album “Some Hearts” debuted that same year. It was at the top of Billboard’s Country Albums chart for 27 weeks and has sold more than 7 million copies.

Her songs and persona have grown up in the last seven years. Just look at her album covers – they are like a photo album of her going from innocent vocalist to diva.

If you missed Underwood live on July 18, check out the “Somethin’ Bad” video where she and Miranda Lambert sizzle. Lambert, who played Tahoe in 2011, has the song on her latest album.

While Underwood didn’t sing “Somethin’ Bad”, it was piped through the speakers just before she took the stage.

Underwood is a definite crossover artist – able to sing pop ballads and rock hits. Not many other country artists could pull off Guns N’ Roses’ “Paradise City” – though, she did sing it at the 2013 CMA Music Festival. 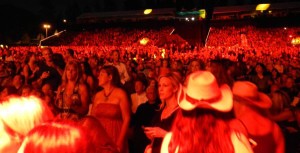 Many fans were dancing throughout the night.

Her seven-member band, though, looks like they would fit in well behind a rock star, or that they could have been mistaken for athletes participating in the American Century Championship. Providing the robust sounds were two bass guitarists, two guitarists (one who also plays fiddle), a keyboardist and drummer. The steel guitar whined like a jilted lover. A backup singer also accompanies Underwood.

While she didn’t interact much with the audience, she did comment on how gorgeous Tahoe is.

She explained how Randy Travis was an inspiration growing up. When she heard his song “I Told You So” she thought a woman should sing it. They have performed it as a duet, but Friday it was all Underwood crooning the lyrics of the love song.

Underwood co-wrote eight of the 14 songs on her fourth and latest album, “Blown Away”.

“Two Black Cadillacs” is a not so subtle story about what happens to a man when his wife and mistress get together.

Underwood seems to have aced songs in which women have been wronged.

What had the full house singing the loudest was “Before He Cheats”. Though, it was clearly a chorus of women belting out: “I dug my key into the side of his pretty little souped up 4 wheel drive, carved my name into his leather seats… I took a Louisville slugger to both headlights, slashed a hole in all 4 tires… Maybe next time he’ll think before he cheats.”

There’s a reason the 7-year-old song is still her best hit – it resonates.