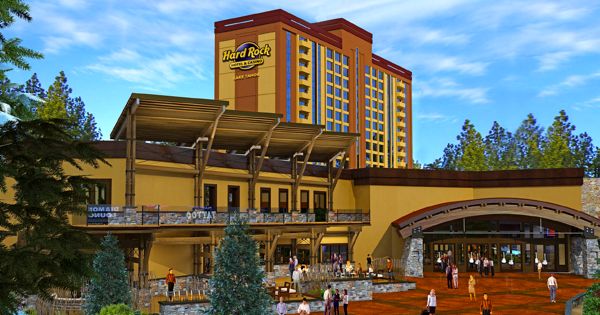 Party central – that is what the former Horizon casino is about to be transformed into when it opens this winter as Hard Rock Lake Tahoe.

Don Marrandino, aka Big D to those who knew him when he oversaw Harrah’s Lake Tahoe and Harveys from 2003-05, is going to run the property. He is headquartered out of the Las Vegas Hard Rock where he recently returned after having a stint in Atlantic City.

Lake Tahoe News in March was the first publication to reveal the Stateline property would be a Hard Rock Hotel. 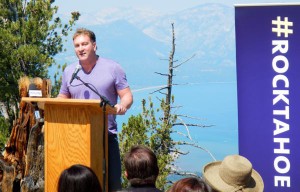 Don Marrandino, who has worked at Lake Tahoe before, will be overseeing the Hard Rock. Photo/Kathryn Reed

“The Hard Rock is known for music and fun,” Marrandino said July 17 during the public announcement.

And Marrandino is known for his love of rock ‘n’ roll. He is a huge fan of Bruce Springsteen and Sammy Hagar.

What the music venue or restaurant scene will be like at the new hotel was not released – just that there will be plenty of both. Marrandino was with Caesars Entertainment when Toby Keith opened his I Love This Bar & Grill at Harrah’s Las Vegas. Keith’s closest restaurant to Tahoe is in Folsom. And Keith has played at Harveys Outdoor Concert Series more than once.

Hagar has his Cabo Wabo at Harveys. Plus, there is a Hard Rock Restaurant at Harveys.

Hard Rock restaurants and hotels are separate companies that no longer have anything to do with each other. The restaurant is essentially a concessionaire of the hotel.

Marrandino told Lake Tahoe News he doesn’t see a problem with the restaurant next door, saying the hotel’s marketing will be so different no one will be confused.

Marrandino also promised to create the area’s largest outdoor pool party. Entertainment will be poolside, too, just like in Vegas.

Anyone familiar with the Las Vegas Hard Rock knows the property is all about partying – from the Rehab pool to the 4,500-seat Joint music venue.

When the Tahoe property first opened in 1965 as Del Webb’s Sahara-Tahoe, Elvis Presley, Phyllis Diller and the Osmond Brothers would play there. It was like having a Las Vegas style hotel-casino in Lake Tahoe.

It may return to that same glory.

MontBleu’s showroom is the largest on the South Shore with seating for 1,400. A larger capacity indoor venue has long been talked about within the community. 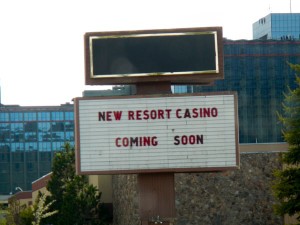 The Horizon closed earlier this year after having been neglected for years. Photo/LTN

Brothers Jon and David Park are infusing nearly $60 million to revamp the property from top to bottom. All 539 rooms are being remodeled, with the goal of creating a four-star hotel. The 25,000-square-feet of gaming will include slots and table games.

The Park family split their holdings last fall, with the brothers getting the Horizon. The brothers formed Neva One LLC. They promised not to be absentee property owners. After all, the Park family has been part of the Tahoe-Carson Valley fabric since the 1800s.

(MontBleu, which is across the street from the Horizon, is an Edgewood Companies property. The lease with Tropicana Entertainment out of Las Vegas expires in 2028.)

The promise is for the Tahoe Hard Rock to open during the 2014-15 ski season.

“It elevates the entire region,” Wagnon said. “They have the same target audience. It couldn’t be a better fit for Heavenly.”

That audience is young, likes to drink and likes to party. Heavenly was trying to showcase its young attitude with the Heavenly Angels (young women not dressed in much wearing platform shoes on the mountain handing out Champagne) during the announcement, which was at the resort’s gondola midstation.

There’s a small storefront near the gondola in Heavenly Village that is a preview center for Hard Rock Lake Tahoe.