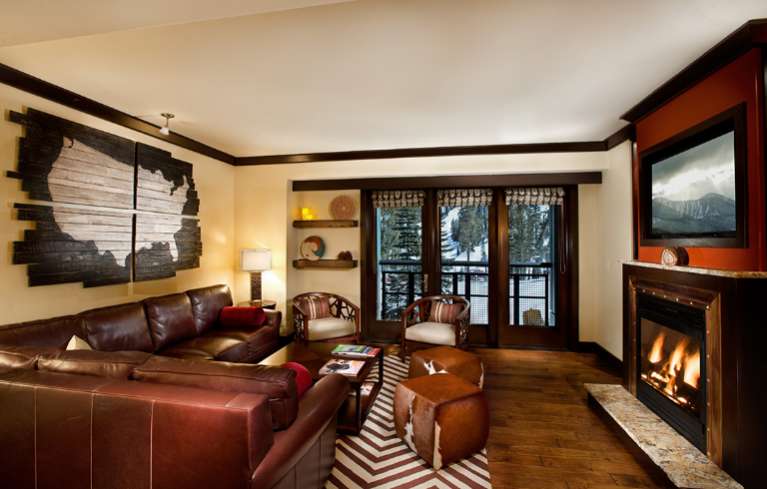 TRUCKEE – Kate Wormington knew she bought into the right ski resort housing venture when she surrendered part of this season to nursing a knee injury — and it wasn’t from skiing.

The San Carlos woman recently came up to her four-bedroom, ski-in, ski-out abode that is attached to the Ritz-Carlton Lake Tahoe at Northstar’s mid-mountain lamenting her running injury. The staff listened. Without a request, an employee working at the Constellation Residences owned by JMA Ventures and managed by Vail Resorts’ RockResorts’ hospitality division delivered a surprise – popcorn, hot chocolate and a movie.

“I didn’t even ask,” she told Lake Tahoe News.

The perfection of the place was also confirmed one day when her family of four was whisked away by a snowcat driver who happened to pull up to ask if they wanted to go on a joy ride. They jumped in and had a blast.

Wormington, her husband and two children also have spent many hours watching the mountain bikers roll down Northstar’s ambitious park, walking their Bernese mountain dog on the mountain and stargazing out the window.

And this year, it’s increasingly obvious how a family may overcome a lackluster snow winter season. The ski-in, ski-out complex has a snow gun situated next to the building on a bunny run leading down to the Big Easy chairlift. 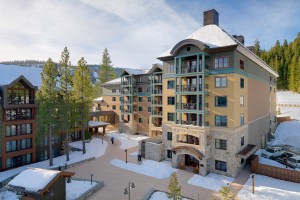 The Constellation, right, is attached to the Ritz-Carlton at Northstar via a walkway.

“A lot of people talk about how terrible the season is because of the snow this year – but ask a mom. The ski school groomers are ideal, and the snowmaking at Northstar is fantastic,” Wormington said, acknowledging the most prominent silver lining for the dry winter season. This is the best time to learn how to ski or hone your children’s skills. The days are sunny, and the crowds are less.

While her 9-year-old daughter has all but passed her up in ability, her 4-year-old son still could use a little work just based on his age. In the summer, he’s also enamored with catching a trout at Northstar’s reservoir that is used to make all that snow when Mother Nature doesn’t deliver.

“My kids have never skied anywhere else. And we never felt the need to take them anywhere else,” Wormington said, albeit further admitting she and her husband have traveled and skied all over. “When it came to Northstar, it’s such a cool atmosphere for kids.”

There are other choices in housing or hotel stays around Northstar – at the village, in the surrounding neighborhoods served by bus or even near Martis Valley with the 3-year-old Martis Camp, luxury homes built by DMB Development.

“They’re beautiful homes and way more expensive, but kids can’t get down to the place. My 4-year-old can’t make it,” she said. The Martis chairlift off Lookout Mountain serves five black diamond runs. The one blue run, Washoe, is even “tricky” for him, she added.

The Wormingtons briefly thought about housing options at the Northstar Village but believed it was a little too noisy to live or stay in.

“I don’t want a club scene. I want a community,” Wormington said. “If we want a vibrant scene, we’ll take the gondola down,” she said. A gondola is located outside the two adjacent properties. “And I like that there’s a certain sense of decorum here at mid-mountain.” She finds that staff watches out for her kids when they’re out and about.

They considered housing sold through the Ritz-Carlton Destination Club but didn’t like the fractional ownership idea.

“We would wonder what weeks we would get,” she said.

With JMA Ventures at the helm, the Wormingtons believe they got the best of all worlds. They brought in their own furniture, which is optional but not common, and turned one of their bedrooms into a bunkroom to accommodate six kids. Everything is there, so when they drive up from the Bay Area, they bring half a suitcase and a cooler and park the car until they leave. The Wormington family is a big hit with friends, too, hosting 20 families since buying Labor Day 2012.

Last November, JMA – which owns Homewood Mountain Resort and expects to break ground in 2015 with an ambitious master plan for the West Shore resort – upped the stakes at Northstar by bringing RockResorts on board as the manager to its Constellation Residences. The Vail Resorts subsidiary specializes in “casually-elegant accommodations,” so Constellation was right up its alley.

Starting at $1.3 million, the residences come with the amenities of the Ritz-Carlton, which is attached by a sky bridge, so owners could saunter through the properties with their slippers on.

Wormington declared the RockResorts-JMA team “takes better care of us than even the Ritz.” Of course, access to all those Ritz amenities like the year-round heated pool, 1,700-square-foot spa and fitness center as well as ski valet and three dining outlets such as its signature Manzanita restaurant add to the ambiance. There are even grocery runs and in-room dining service provided at Constellation.

The residences are loaded

Built in 2008 to sell, the 1,800-square-foot residences are equipped with LCD televisions, wireless Internet, gas fireplaces, patio furniture, washers and dryers, central heating and air conditioning, a wine refrigerator, heated marble floors and jetted tubs in the master bathroom – among other things. The craftsmanship is meticulous, and the floor plan is ideal for those wanting a little space in their bedroom wing. Outside storage for larger toys is available.

Then there’s the no-holds-barred service to answer every whim. Units the owners have rented out have hosted wedding parties and many special occasions.

“You know, we bought it for the layout, and the Ritz amenities are super, but we found out later how amazing the Constellation staff is. We’ve stayed all over the world, but the customer service is best here,” Wormington said.

Northstar’s slopes are out the back door. Ski valet is provided as well as an area to warm boots.

And Constellation sales specialist Brit Crezee said more ideas are in the works to beef up the service and amenities such as beach shuttles in summer. Prospective buyers have responded. While 11 units fall under the fractional Ritz Destination Club realm, only five of the 17 Constellation housing units in the first phase are left. The second phase of Constellation is expected to be available for purchase in about a year. JMA Ventures expects to begin building those 50 units in 2015.

Crezee isn’t surprised by the demand. Beyond the obvious San Francisco Bay Area market, she’s had buyers from Boulder, Colo., and San Diego.

“At 6am, they can be on a flight (to Reno), and be on the slopes by 9,” she said of Southern Californians.

Crezee has seen all types of buyers and renters – but all seem to share one common denominator.

“People want the Ritz experience, but want more convenience and to have the room to spread out,” she said. “There’s really nothing like this in Tahoe or North America.”

Indeed, the Constellation Residences represent the positive “perfect storm” of ski resort housing for those who can afford it.

First, the Ritz-Carlton Lake Tahoe is the only 5-diamond resort in the Tahoe area and for good reason. It lives up to its brand name in a mid-mountain environment.

And Vail has made a significant investment since buying Northstar from Booth Creek Holdings a few years ago.

“They know the demographic and know what to do to make people happy,” Crezee said.

Vail’s subsidiary RockResorts is a leading vacation-rental and whole-ownership hospitality company with luxury resorts maintained and managed from Colorado to Jamaica’s renowned plantation-influenced Half Moon property in Rose Hall, which is celebrating 60 years in 2015. Vail has been the sole owner of RockResorts since 2005. Laurance Rockefeller started it.

Interestingly enough, the city of South Lake Tahoe had a shot at RockResorts to run the hotel of the convention center project before the developer of the Chateau at Heavenly Village went bankrupt due to financing issues. RockResorts long ago terminated marketing license and technical services agreements associated with the project.

Vail Resorts Hospitality Chief Operating Officer James O’Donnell declined to comment on previous “business dealings” such as the aforementioned negotiation, but as the ski resort company runs Heavenly Mountain Resort across the street he took the high road in saying Vail “has a keen interest in seeing someone being successful with development there.”

The Constellation project represents a shift in focus to grow lodging properties at the base of ski resorts. Nonetheless, Vail’s focus on the year-round business through RockResorts’ offerings is expected to lean toward enhancing the activities of summer.

“This is a unique opportunity to demonstrate our commitment to enhancing the entire guest experience. We couldn’t have been more excited,” said Ashley Lowe, the senior spokeswoman for the hospitality and real estate division of Vail Resorts Management Company.

It’s all about relationships

No one could be in more agreement with the RockResorts’ line of thinking than Todd Chapman, chief executive officer of JMA Ventures, a company he has helped run for 13 years with his father, Art.

Chapman pointed out to Lake Tahoe News that he has a professional and personal interest in Constellation Residences at Northstar.

“The partnership is the driving force behind the relationship. We have a well-located product. RockResorts – Vail’s hospitality arm – saw this opportunity as unprecedented access to the mountain that no one else can deliver,” Chapman said. “It’s obvious that when we look at investment opportunities, we look at the interest level of others to them.”

But it’s not all about business and coinciding partnerships to Chapman. He walks the talk. Chapman bought into the housing complex and relishes his time there to “unplug” from the pressures of modern life with his family consisting of his children, ages 6, 8 and 9.

“This is the best time to enjoy our family. We drive up from the Bay Area, park the car, and we don’t touch the car until we leave for the weekend,” he said. “My kids can sleep in until 8 and be on the mountain by 8:45. We value (that time),” he said.

However, he did admit to being a little surprised by the interest level this year with the dry winter conditions.

“Based on the snow, this says a lot about the commitment folks have to the alpine life,” Chapman said.